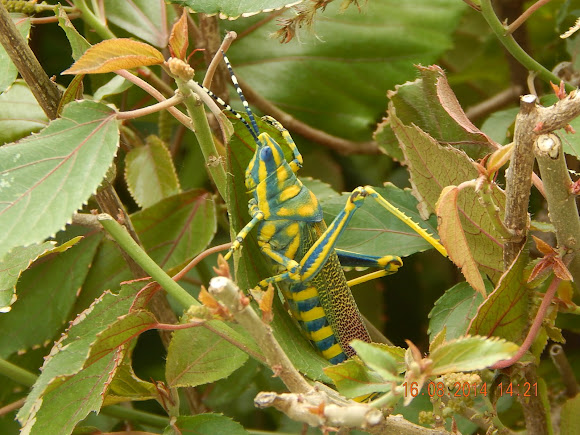 The grasshopper feeds on the poisonous plant Calotropis gigantea. Upon slight pinching of the head or abdomen, the half-grown immature form ejects liquid in a sharp and sudden jet, with a range of two inches or more, from a dorsal opening between the first and second abdominal segments. The discharge is directed towards the pinched area and may be repeated several times. The liquid is pale and milky, slightly viscous and bad-tasting, containing cardiac glycosides that the insect obtains from the plant it feeds upon. In the adult, the discharge occurs under the tegmina and collects as viscous bubbly heap along the sides of the body. (copied from wikipedia: http://en.wikipedia.org/wiki/Poekiloceru...)

The half-grown immature form is greenish-yellow with fine black markings and small crimson spots. The mature grasshopper has canary yellow and turquoise stripes on its body, green tegmina with yellow spots, and pale red hind wings. (copied from wikipedia: http://en.wikipedia.org/wiki/Poekiloceru...)

Thanks Rob for the suggestion!
I will update the profile of this spotting now.