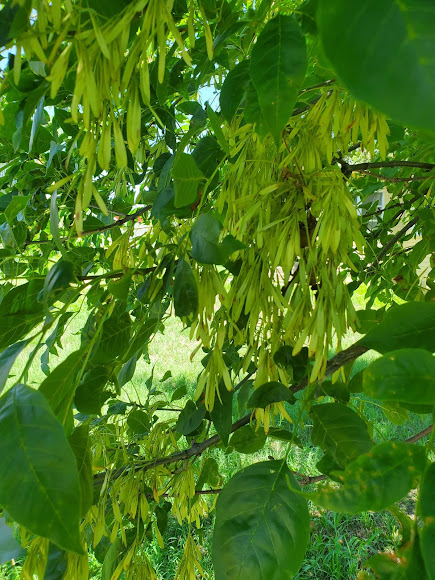 I am beyond stoked to bring you a spotting of the green ash! Note the d-shaped leaf scars, the similar white ash has c-shaped leaf scars. Both however, are tragically preyed upon by the emerald ash borer, to the point of near extinction. The green ash is listed as Critically Endangered by the IUCN. This is due to the emerald ash borer an invasive pest from Asia (imagine that Asia ruining the ecosystem). A real pain in the ash who destroys not just this species but the white and blue ash as well. If something isn't done to curtail the spread of this invasive species we can kiss our Ash goodbye. The green ash is the most common ash in America. There was a study done that there are some wild ash populations that remained healthy despite EAB infestation. Research is being done to see if there is a way to create genetic resistance for these trees. This particular ash showed no signs of EAB infestation but to wit the EAB hasn't been spotted in Kansas. The ashes share an ancient connection to Elms and Cottonwoods as part of the hardwood bottomland ecoystem. Which is neat because I see all three species on the regular.

The green ash is native to the MIdwest and Great Plains and is widespread among the US. Despite the Emerald Ash Bastard the green ash along with the American elm is the most popular ornamental tree in America.