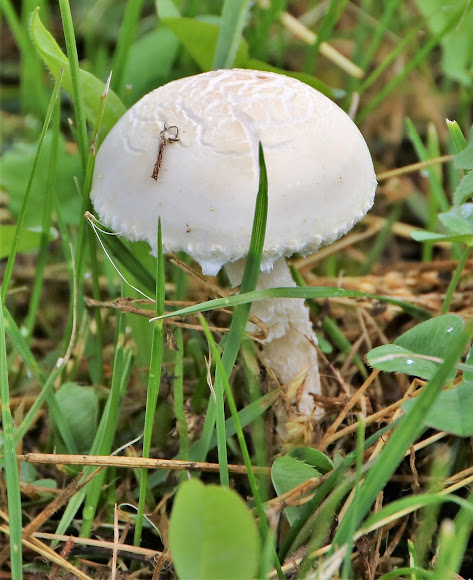 White carpophore, some 7 to 8 cm tall, with convex white cap, about 5 cm in diameter, with edges covered by partial cottony remains of white veil. I did not discern any particular smell, and carpophores appeared in small dispersed group. Stipe is cylindrical, white, with double ring (rest of the veil and volva). The white and tightly packed gills, as well as rests of volva point to Amanita genus, while the rests of that veil and wrinkled surface of the cap suggest the European white egg or Amanita ovoidea species. However, this fungus is associated with oaks and pines; and edges of forested areas...

As explained above, this description fits most to European white egg (Amanita ovoidea), a.k.a. Bearded Amanita or European Egg Amidella. However, I'm keeping it on genus level still, because of my own inexperience with mushrooms and the habitat that does not really fit... Moreover it seems that A. ovoidea is somewhat less known in regards to its toxicity - some materials say it is poisonous, while other state it as edible.