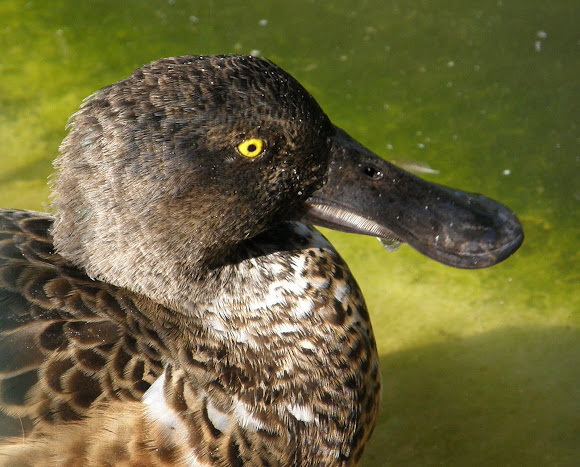 Also known as spoony because of the spoon-shaped bill. This species is unmistakable in the northern hemisphere due to its large spatulate bill. The breeding male has an iridescent dark green head, white breast and chestnut belly and flanks. In flight, pale blue forewing feathers are revealed, separated from the green speculum by a white border. In early fall the male will have a white crescent on each side of the face. In non-breeding (eclipse) plumage, the drake resembles the female. The female is a drab mottled brown like other dabblers, with plumage much like a female Mallard, but easily distinguished by the long broad bill, which is gray tinged with orange on cutting edge and lower mandible.[The female's forewing is grey. They are 19 inches long (48 cm) and have a wingspan of 30 inches (76 cm) with a weight of 1.3 pounds (600 g). Northern Shovelers feed by dabbling for plant food, often by swinging its bill from side to side and using the bill to strain food from the water. They use their highly specialized bill (from which their name is derived) to forage for aquatic invertebrates - a carnivorous diet. Their wide-flat bill is equipped with well developed lamellae - small, comb-like structures on the edge of the bill that act like sieves, allowing the birds to skim crustaceans and plankton from the water's surface. This adaptation, more specialized in shovelers, gives them an advantage over other puddle ducks, with which they do not have to compete for food resources during most of the year. Their nest is a shallow depression on the ground, lined with plant material and down. Hens typically lay about nine eggs. The drakes are very territorial during breeding season and will defend their territory and partners from competing males. Drakes also engage in elaborate courtship behaviors, both on the water and in the air; it is not uncommon for a dozen or more males to pursue a single hen. Despite their stout appearance, shovelers are nimble fliers

Is a common and widespread duck. It breeds in northern areas of Europe and Asia and across most of North America, and is a rare vagrant to Australia. Mud-bottomed marshes rich in invertebrate life are their habitat of choices The shoveler prefers to nest in grassy areas away from open water.

I would guess that the male in my pictures must have engaged in some sort of fight since he was missing part of his white chest feathers.

Yes! and also I love these yellow eyes :-)