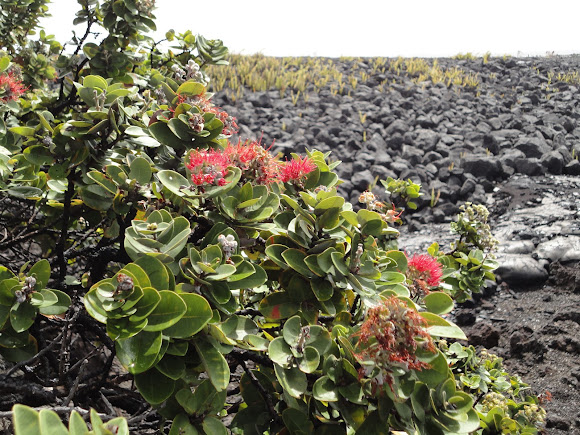 The ʻōhiʻa lehua[2] (Metrosideros polymorpha) is a species of flowering evergreen tree in the myrtle family, Myrtaceae, that is endemic to the six largest islands of Hawaiʻi. It is a highly variable tree, being 20–25 m (66–82 ft) tall in favorable situations, and much smaller when growing in boggy soils or on basalt. It produces a brilliant display of flowers, made up of a mass of stamens, which can range from fiery red to yellow. Many native Hawaiian traditions refer to the tree and the forests it forms as sacred to Pele, the volcano goddess, and to Laka, the goddess of hula. ʻŌhiʻa trees grow easily on lava, and are usually the very first plants to grow on new lava flows. The tree itself is referred to as an ʻōhiʻa tree, and the blossoms are called lehua flowers. This distinction comes from Hawaiian mythology, in which ʻŌhiʻa was a handsome warrior and Lehua was his beautiful lover, and they were transformed into a tree and its flowers, respectively.

Metrosideros polymorpha may occur as a tall tree or a prostrate shrub, and everything in between. Preferred soils are acidic to neutral (pH 3.6-7.4) and either a Histosol, Mollisol, Podsol, Oxisol, Ultisol, or Alfisol. Rainfall of 1,000–3,000 mm (39–120 in) per year is favored, but ʻōhiʻa can grow in dry forests that receive as little as 400 mm (16 in) or bogs that get more than 10,000 mm (390 in) of rain.[1] On moist, deep soils, ʻōhiʻa grows to 20–25 m (66–82 ft) high. Specimens reaching 30 m (98 ft) high are on record. The trunk varies in form. In some trees, it is straight and smooth; in others, it is twisted and prominently fluted. Trees growing in forests often have stilt roots, having germinated on logs or the stems of fallen hāpuʻu (Cibotium tree ferns), which have long decayed away when the tree has reached maturity. Some trees have fibrous aerial roots to gather moisture. At high elevations, and in areas with poor soils or little rainfall, shrub forms are the norm. Flowers are usually bright to medium red but orange-red, salmon, pink, yellow, or orange forms are also found. The flowers appear in clusters on the terminal ends of the branches. Masses of stamens extend from the flower and give the blossoms their characteristic pom-pon shape.

Bingo, Stephen! Thanks for the ID!