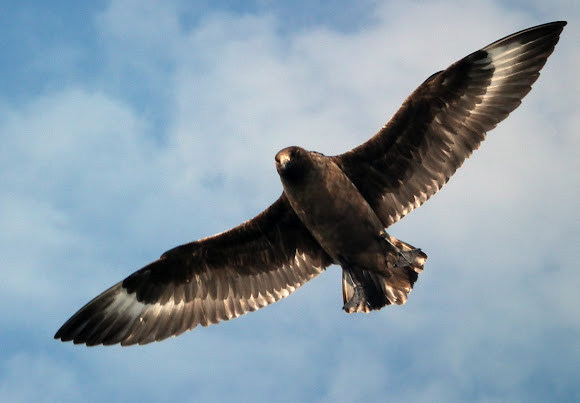 Skuas are the seabird pirates of the the open seas. Easily recognisable by their large size, sturdy build, brown and white flecked feathers and long, hooked bill. Aggressive birds, will steal food from others as large as gannets. Despite this, I only ever saw them being chased by fulmars!

Rocky coasts with sheer cliffs and the open sea

The guy in the first picture nearly landed on my head! These were taken off one of the Shetland Islands, called Foula. We were sampling at 4am, and the water was eerily still, and HUNDREDS of birds were surrounding the boat. It was incredible. I later found out that "Foula" translated from Old Norse means "bird island", which couldn't have been more apt!

That is a super shot Laura

Thank you both for the comments :) It was a lucky shot, I thought he was going to land on my head haha!

What a gorgeous shot!

Thanks Ashish, it was quite an amazing morning to find these birds surrounding us! They are pretty cute, I think :D

Thank you Eve! Yes, they are indeed amazing, and very bold!

Nice pics specially the first one

Thank you Luc! Yes I was very pleased with how that first photo came out :) The bird island was amazing!!

It must have been amazing this " bird island " Laura . I love your photos, they are very impressive. My favorite is the first in full flight ! wow !! :))