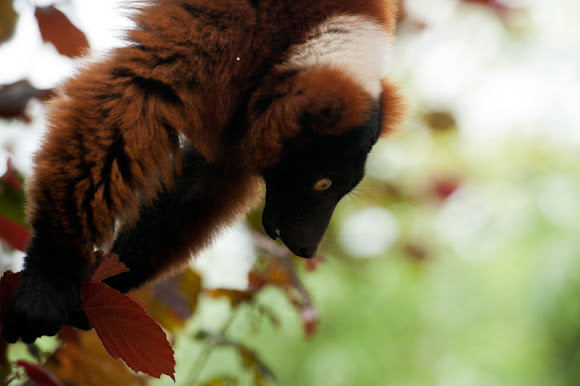 Lemurids are medium-sized arboreal primates, ranging from 32 to 56 cm in length, excluding the tail, and weighing from 0.7 to 5 kg. They have long, bushy tails and soft, woolly fur of varying coloration. The hindlegs are slightly longer than the forelegs, although not enough to hamper fully quadrupedal movement (unlike the sportive lemurs). Most species are highly agile, and regularly leap several metres between trees. They have a good sense of smell and binocular vision. Unlike most other lemurs, all but one species of lemurid (the Ring-tailed Lemur) lack a tapetum lucidum, a reflective layer in the eye that improves night vision.

Lemuridae is a family of prosimian primates native to Madagascar, and one of five families commonly known as lemurs. These animals were thought to be the evolutionary predecessors of monkeys and apes, but this is no longer considered correct. The family gets its name from the Ancient Roman belief[citation needed] that the animals were ghosts or spirits ('lemures'), because many species are nocturnal. Here spotted in the Amsterdam Zoo.