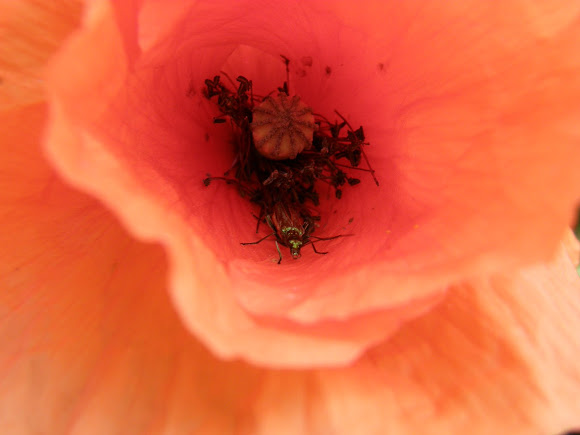 Is the typical red poppy many of us are used to see. Papaver rhoeas (common names include corn poppy, corn rose, field poppy, Flanders poppy, red poppy, red weed, and, due to its odour, which is said to cause them, as headache and headwark) is a species of flowering plant in the poppy family, Papaveraceae. The plant is a variable annual, forming a long-lived soil seed bank that can germinate when the soil is disturbed. In the northern hemisphere it generally flowers in late spring, but if the weather is warm enough other flowers frequently appear at the beginning of autumn. The flower is large and showy, with four petals that are vivid red, most commonly with a black spot at their base. Like many other species of Papaver, it exudes a white latex when the tissues are broken.

This poppy, a native of Europe, is notable as an agricultural weed (hence the "corn" and "field") and as a symbol of fallen soldiers. P. rhoeas sometimes is so abundant in agricultural fields that it may be mistaken for a crop. The only species of Papaveraceae grown as a field crop on a large scale is Papaver somniferum, the opium poppy. Is very common in the summer in Flanders.

The little insect inside and around is Oedemera nobilis.The male of Oedemera nobilis, as in most Oedemera species, possesses the hind femora very swollen, whereas in female the femora are thin. It is bright green, frequently with a golden or coppery shine; some individuals are blue or violaceous. Western and southern Europe, frequently found in poppies.