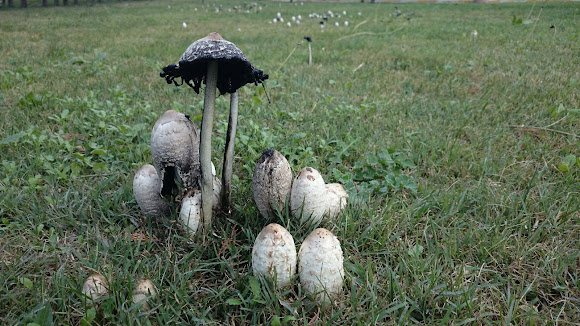 Coprinus comatus, which is commonly known as Shaggy mane, shaggy ink cap or lawyer's wig, has a cap with a cylindrical form that covers most of the stem when young. The cap, which is covered with shaggy scales, opens and curls up as the mushroom matures; during this process the mushroom starts to self digest to release the spores, the digestion turns the cap into black inky substance, hence the name shaggy ink cap.

C.comatus is a mushroom that occurs naturally in meadows and grasslands in Europe and north America. It appears that the mushroom was introduced to most parts of the world including Australia, New Zealand, Japan and Brazil. Spotted growing on a playground near the D100 state road near Selimpaşa in the European side of Istanbul, approx. elevation 0 to 50 m.

The playground was covered with C.comatus, can be seen on the background of foto 1. There were also some small brown Cortinarius sp. growing interspersed in the playground.