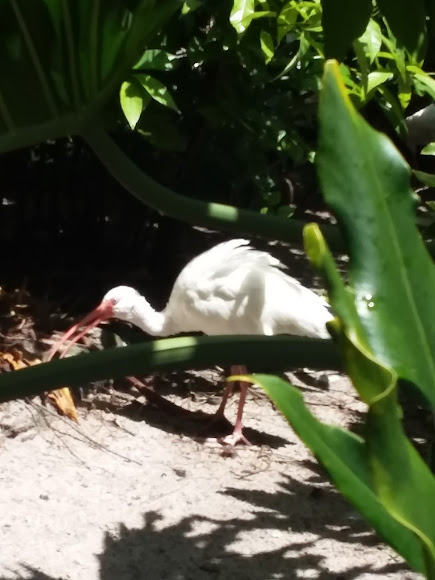 An American white ibis hiding in the brush at Cocoa Beach, Florida. The American white ibis was first described by the father of zoology, Carl Linnaeus. Interestingly, the zoologist Mark Catesby mistook young birds (which are brown) as a separate species. Just shows you how far we've come. The white ibis has a lot of habitat overlap and hybridization with the scarlet ibis. Because of this hybridization, certain ornithologists do consider the two the same species or at least subspecies of a greater taxa, having separated populations at one point before rejoining somewhere around South America. Theorizing the color difference being due to the presence of an enzyme that allows the uptake of pigment, similar to that seen in flamingos. It's an interesting theory.

Found in the Southeastern US, down into the gulf of Mexico. Throughout Mexico, and parts of both Central and South America. Cuba and the surrounding islands.