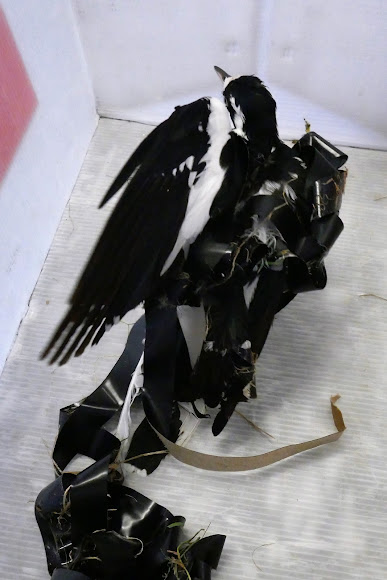 This little bird is lucky to be alive! Long story short - I was drawn to the location because of a wild commotion of a hundred or more birds, all congregated into a small area. Some birds were on the ground, others on the power lines, some swooping, all squawking - crows, noisy miners, magpies, butcher birds, etc. - it was total chaos! As I approached, it appeared at first that a bird had been captured by a snake, a very large black snake, but then I could see it just happened to be a length of duct tape about 2-3 metres long, and a peewee (female) had become stuck to and entangled in it - a total mess! She was unable to free herself, and her feathers were so sticky that I couldn't free her either. To make matters worse, any attacking birds also ran the risk of becoming stuck themselves, and they were in a frenzy probably thinking it was a snake as well. It was a pretty dire situation, so I scooped her up and headed for the nearest vet, which would then call in the RSPCA. Solvents would be needed to remove the tape, and that would affect the feathers ability to repel water, not to mention the feathers that may have been damaged in the struggle. Regardless, peewee would have died if left behind, so is now in a much safer place. Hopefully, she'll be released back to her home territory before too long. In the meantime, just a little TLC is required. PS: I know this is a female bird because she has white throat feathers, whereas the males feathers are black. He also has a white "eyebrow."

Found in almost any habitat except rainforests and the driest deserts. Common and very widespread in urban and rural areas. I found this bird in a local football park.

I wrote an email to the football club where I found the bird, and attached photos as well. The club manager responded to me immediately and was quite distressed by the images I sent. Also an animal lover, she thanked me for rescuing the bird and taking it to the vet. She was also quick to action and had already notified the groups/teams/schools involved. The tape may not have been from a player at all, but I was so grateful for the action she took. The whole experience is a very timely reminder that we should all be hyper-vigilant about how we manage our waste and dispose of our garbage. PS: And I refuse to call this bird a magpie-lark, because it is neither a magpie nor a lark. To me, it is a peewee, the common name used in NSW and QLD. In Victoria and WA, it's known as a mudlark. It is often confused with the Australian magpie (Gymnorhina tibicen), even though the peewee is a smaller bird. The name "peewee" comes the sound of its distinctive calls.

No, it's not, Sukanya. Most of my most memorable rescues have been when I'm at work and in a fleet car. Animals are forbidden in these vehicles, but the company knows that, short of parking a car on top of me or locking me up, they can't stop me, so they turn a blind eye and everyone is happy. I'm a bit of an oddball anyway, so they can't deal with me with the usual protocols simply because they know I'll agree until the next time. The rescue before the peewee was a river turtle, and It pooed all over me and the car. Eeewwww, but c'est la vie :)

Not the first rescue story for you...thank you Neil.

Not yet, Daniele. I'm back in that area next week, so will pop into the vet then. They may have a reference nbr. My mind keeps wandering back to her and how helpless she looked. Hope she's ok.

Thank you for this story Neil! Any update?

So am I, Christine. I was working at the time and this made me run quite late. Worth it though. A lucky little bird.

Really great spotting and notes. So glad you found and helped this bird!

Thank you, maplemoth662. I wish I had time to get pics of the bird frenzy. That's what drew me to the location in the first place.