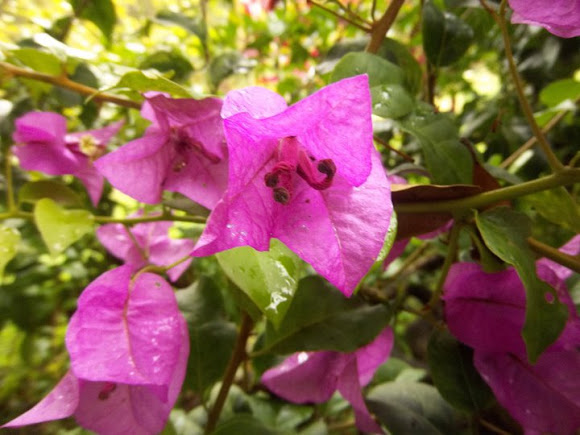 Bougainvillea is a genus of flowering plants native to South America from Brazil west to Peru and south to southern Argentina (Chubut Province). Different authors accept between four and 18 species in the genus. The plant was classified by Europeans in Brazil in 1768, by Philibert Commerçon, a French botanist accompanying French Navy admiral and explorer Louis Antoine de Bougainville during his voyage of circumnavigation. They are thorny, woody vines growing anywhere from 1-12 meters tall, scrambling over other plants with their spiky thorns. The thorns are tipped with a black, waxy substance. They are evergreen where rainfall occurs all year, or deciduous if there is a dry season. The leaves are alternate, simple ovate-acuminate, 4-13 cm long and 2-6 cm broad. The actual flower of the plant is small and generally white, but each cluster of three flowers is surrounded by three or six bracts with the bright colors associated with the plant, including pink, magenta, purple, red, orange, white, or yellow. Bougainvillea glabra is sometimes referred to as "paper flower" because the bracts are thin and papery. The fruit is a narrow five-lobed achene. Bougainvillea are relatively pest-free plants, but may suffer from worms, snails and aphids. The larvae of some Lepidoptera species also use them as food plants, for example the Giant Leopard Moth (Hypercompe scribonia). - Wikipedia

A floriferous climber, commonly cultivated as an ornamental in the plains; also grown as dwarf pot plants. Seed formation is rare. Flowers throughout the year.