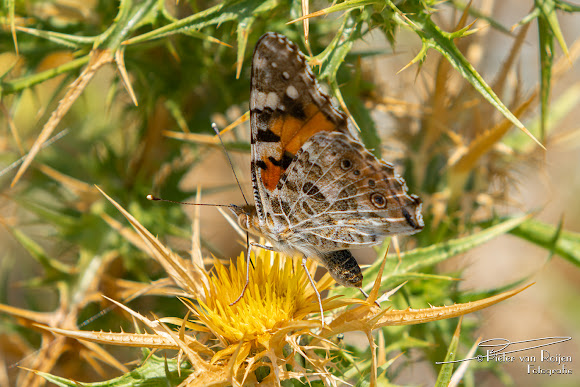 Vanessa cardui is a well-known colourful butterfly, known as the painted lady or formerly in North America as the cosmopolitan. Male and female. Upperside. Ground-colour reddish-ochreous, basal areas olivescent-ochreous-brown; cilia black, alternated with white, Forewing with an outwardly-oblique black irregular-shaped broken band crossing from middle of the cell to the disc above the submedian vein; the apical area from end of cell and the exterior border also black; before the apex is a short white outwardly-oblique streak and a curved row of four round spots, the second and third being small; a marginal pale lunular line with its upper portion most defined and whitish. Hind-wing with a blackish patch from the costal vein across end of cell, a partly confluent recurved discal band, a submarginal row of lunules, and then a marginal row of somewhat scutiform spots; between the discal band and submarginal lunules is a row of five round black spots, which in some examples show a pale and dark outer ring. Underside. Forewing brighter reddish-ochreous, the apical area and outer margin much paler, the apex being olivescent ochreous-brown; discal irregular band as above, subapical white streak, row of spots and marginal lunules distinct; base of wing and interspace before end of cell white. Hindwing transversely-marbled with olivescent ochreous-brown and speckled with black scales; crossed by basal and discal sinuous whitish or pale fascia and intersected by white veins; an outer-discal row of five ocelli, the upper one smallest and usually imperfect, the second and fifth the largest, the fourth with black centre speckled with blue and ringed with yellow, and the second and fifth also with an outer black ring; submarginal lunules purpurescent-grey, bordered by a whitish fascia; outer margin ochreous. Body olivescent ochreous-brown, abdomen with ochreous bands; palpi blackish above, white beneath; body beneath and legs greyish-white; antennae black above, tip and beneath reddish.

V. cardui is one of the most widespread of all butterflies, found on every continent except Antarctica and South America. In Australia, V. cardui has a limited range around Bunbury, Fremantle, and Rottnest Island. However, its close relative, the Australian painted lady (V. kershawi, sometimes considered a subspecies) ranges over half the continent. Other closely related species are the American painted lady (V. virginiensis) and the West Coast lady (V. annabella). The species is resident only in warmer areas, but migrates in spring, and sometimes again in autumn. It migrates from North Africa and the Mediterranean to Britain and Europe in May and June, and from the Red Sea basin, via Israel and Cyprus, to Turkey in March and April.