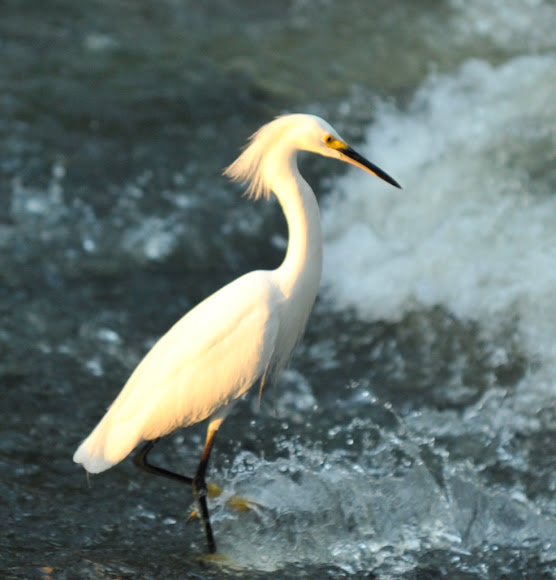 found at the bush reservoir, close to buffalo bayou, houston, texas looking for a meal. The Snowy Egret (Egretta thula) is a small white heron. It is the American counterpart to the very similar Old World Little Egret, which has established a foothold in the Bahamas. Adults are typically 61 centimetres (24 in) long and weigh 375 grams (13.2 oz) They have a slim black bill and long black legs with yellow feet. The area of the upper bill, in front of the eyes, is yellow but turns red during the breeding season, when the adults also gain recurved plumes on the back, making for a "shaggy" effect. The juvenile looks similar to the adult, but the base of the bill is paler, and a green or yellow line runs down the back of the legs. The birds eat fish, crustaceans, insects and small reptiles. They stalk prey in shallow water, often running or shuffling their feet, flushing prey into view, as well "dip-fishing" by flying with their feet just over the water. Snowy Egrets may also stand still and wait to ambush prey, or hunt for insects stirred up by domestic animals in open fields. Medium-sized, totally white egret with a long slender black bill with yellow lores. The eyes are yellow and legs are black while feet are bright yellow. The head, neck and back have long, lacy plumes during breeding season. Generally silent and feeds on crustaceans, insects, and fish.

Breeds locally from Oregon and California east to New England, mainly along coasts. Spends winters regularly from California, Arizona, and Virginia south to the West Indies and South America. Preferred habitats include marshes, ponds, swamps, and mudflats. Their breeding habitat is large inland and coastal wetlands from the lower Great Lakes and southwestern United States to South America. The breeding range in eastern North America extends along the Atlantic and Gulf Coasts from Maine to Texas, and inland along major rivers and lakes. They nest in colonies, often with other waders, usually on platforms of sticks in trees or shrubs. Their flat, shallow nests are made of sticks and lined with fine twigs and rushes. Three to four greenish-blue, oval eggs are incubated by both adults. The young leave the nest in 20 to 25 days and hop about on branches near the nest before finally departing. In warmer locations, some Snowy Egret are permanent residents; northern populations migrate to Central America and the West Indies. They may wander north after the breeding season, very rarely venturing to western Europe—the first bird sighted in Britain wintered in Scotland from 2001–2002.

At one time, the beautiful plumes of the Snowy Egret were in great demand by market hunters as decorations for women's hats. This reduced the population of the species to dangerously low levels. Now protected in the USA by law, under the Migratory Bird Treaty Act, this bird's population has rebounded.

I know..I did not witness the egret gotten any fish the whole time I was there. The herron got lucky!

Frustration for the egret when the heron got the fish :-)
Nice pictures!

Nice captures. Especially nice that you managed to get a Black-crowned Night Heron next to a Snowy Egret.