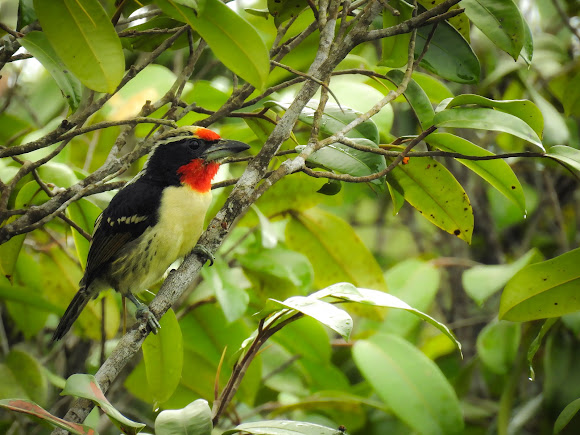 The black-spotted barbet (Capito niger) is a species of bird in the Capitonidae family.

It is found in forests in northeastern South America, ranging as far south as the Amazon River and as far west as the Branco River. Previously, it included the gilded barbet of the southern and western Amazon Basin as subspecies. As currently defined, the black-spotted barbet is monotypic.

The western range limit of the black-spotted barbet is eastern Venezuela, mostly border areas, and to the south in Brazil's Roraima state, the bird is only found on the eastern banks of the south-flowing Branco River. The species only ranges north of the Amazon River, and is found in the northeast Amazon Basin in Brazil's states of Roraima, Pará, and Amapá, on the Atlantic coast bordering French Guiana. The black-spotted barbet's range is one contiguous region, centered on the Guiana Highlands, and the northeast Amazon Basin.