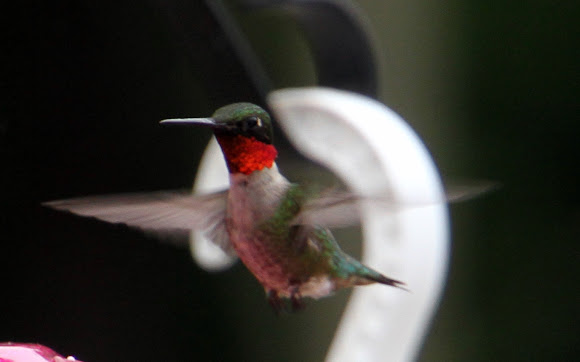 The Ruby-throated Hummingbird is 7–9 cm long with an 8–11 cm wingspan, and weighs about 3 g. Adults are metallic green above and greyish white below, with near-black wings. Their bill is long, straight and very slender.

The breeding habitat is throughout most of eastern North America and the Canadian prairies, in deciduous and pine forests and forest edges, orchards, and gardens. The female builds a nest in a protected location in a shrub or a tree. The Ruby-throated Hummingbird is migratory, spending most of the winter in southern Mexico, Central America as far south as South America, and the West Indies. It breeds throughout the eastern United States, east of the 100th meridian, and in southern Canada in eastern and mixed deciduous forest.

Wonderful shot! I tried recently getting a picture of one, but it was too fast. Beautiful bird though