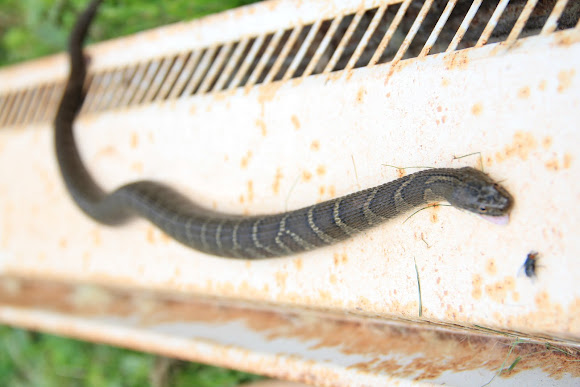 Grey-banded water snake i believe. Light underbelly and round pupils. Caught in minner trap looked dead, but turned loose in hopes that it would survive, and took off as soon as it was in familar territory. Do water snakes normally "play dead"?

Caught in a minner trap and was underwater for a little while until I was able to check it. We brought it to camp and laid it out and by the photos you can probably see it looked dead, though it would slightly expand its midsection every so often. Because of this, we decided to try and turn it loose and as soon as it was back in the area it was caught, it shot off into the water like nothing was wrong with it.

Buts a good incidence..Nice to know it was non venomous snake..!!

Hahaha...He just met you to appear on Project Noah....nothing else...!!

That must have been why I'm not for sure how long he was in there. Thanks for the suggestion and your information!

This is a Northern Brown Watersnake, which I believe is the only species of watersnake that you have in West Virginia. Members of the Genus Nerodia are well known for their bad tempers and aggressive behavior, but I have found this snake to be one of the more docile watersnakes. Generally when I catch them, they bite/or try to bite me once or twice and then give up, but just a few weeks ago I had one chew on my arm for a little bit.

I have never encountered one that was "playing dead." My best guess is that this guy was stunned or in bad shape in the minnow trap and was trying to recuperate. Glad he wasn't dead!