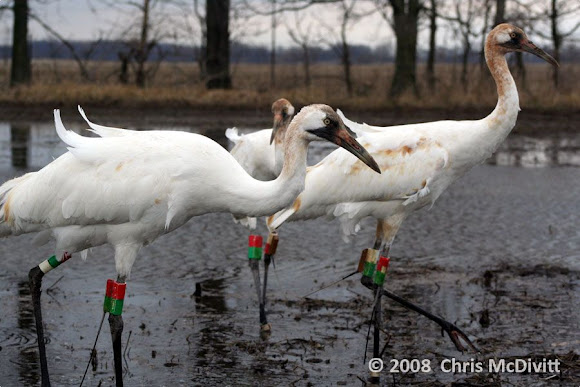 Tallest North American bird; males up to five feet tall with up to a seven foot wingspread are larger than females. Snowy white with black wing tips. Immatures are reddish cinnamon becoming mottled as white feathers replace the dark. Red on forehead and cheeks. Bill is dark olive-gray becoming lighter during breeding season. Eyes are yellow. Feet and legs are dark gray. The whooping crane is a s a federally endangered species in the United States. (http://www.fws.gov/)

Nest in marshy areas among bulrushes, cattails and sedges, which provide protection from predators as well as food. At night, when not incubating, they roost in shallow water where they are safe from predators such as coyotes and bobcats. Prefers open areas. (http://www.fws.gov/)

In the spring of 2008 these five whooping cranes were spotted in the wild on a farm in eastern Indiana. (The location listed on the map is not exact.) The species was unknown at the time I took these photos, which was to help positively identify and report them to the local wildlife agency, as they were all wearing tracking bands. Once identified and reported, I was asked to stay as far away as possible from the birds to avoid human contact, which is essential for their reestablishment back into the wild. Six cranes arrived, but one died as an apparent result of colliding with a power line--their primary cause of death. The deceased was recovered by the U.S. Fish and Wildlife Service. They were migrating from Florida to Wisconsin and remained in the eastern Indiana area for four weeks, then continued their migration north.

Thank you for the info about the Crane's Mission, 1Sarah2! I added this spotting to its mission.

Beautiful! Please consider adding this spotting to the Cranes mission. It is currently a local mission, but I have requested to have it moved to global. Thanks!