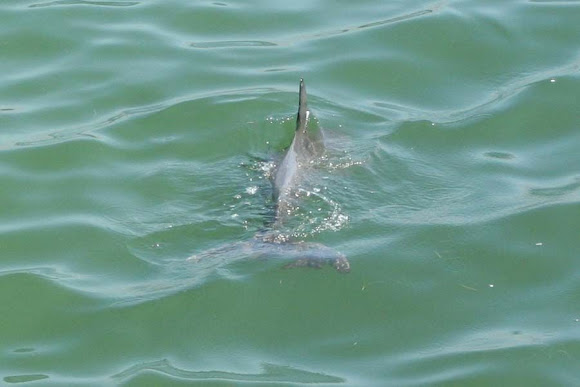 Discovered off the shore at Honeymoon Island near Dunedin. It circled nearby several times, racing up against the retaining wall, and appeared to be eating fish. At one point, it nearly collided with a pelican that landed on the water at the same point where the dolphin emerged (2nd photo).

cmcdivit, If you follow the fishermen in the mornings (before the sun rises) or when they come in around sunset, the dolphins very active all over in Florida. They fish when fishermen fish. As are the seagulls and other birds. If you get a chance, you might see some just standing off a dock/pier/marina, especially at sunrise to about 9am, then 4pm to late dusk. I wouldn't go into the water then, as sharks are also most active then too. The larger animals follow the schools of fish.

I once saw some dolphins "surfing" on Jacksonville Beach, FL when the sun was rising and along the beach to the horizon, the Atlantic Ocean was lake calm except for 3 or 4 ft swells building about 10 yards out, and breaking north on Jax Beach. I looked down from my 3rd floor window and saw the fins bopping up and down, then saw one "surfing" the inside of the wave for the wave's length, then I guess it got to shallow because the dolphin was turning towards the deep and it did this 3 times, or was 3 dolphins. It was very neat to witness.

Good luck with the dolphin watch. You are also near the Manatee favorite spots, by the way.

I only had the pleasure of seeing just this one. I would think it would be awesome seeing several together. This was the first and so far only dolphin I've seen in the wild. They're remarkable creatures.

Occasionally, as a kid, we could spot these dolphins off the docks in the brackish (part salt part fresh) water in the bayous off the Choctawhatchee Bay which is off the northern part of the Guld of Mexico. We'd see the fins of one or two, maybe three eating schools of fish. The water was not as clear as the Bay, but the coves of the bayous would trap fish schools between the curve of the shores and the shallow, usually sandy bottoms of the bayous. The closer the fish would get to the rivers and streams supplying the bayous with their fresh water, there would be more seagrass and larger groups of dolphins.