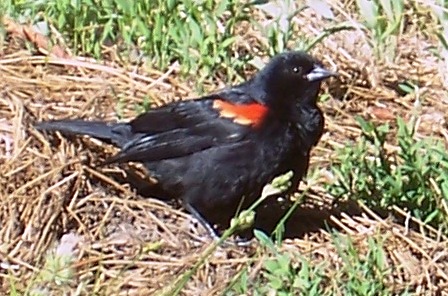 The Journey North website is a great website for teachers, but they do not study the southern migration of Red winged black birds.

I found some old data from the 1970s, it would not apply to the current population.Regarding the Red-winged Blackbird: Breeds from Alaska east across Canada to Newfoundland and south to northern Baja California, central Mexico, the Gulf Coast, and Florida. Spends winters regularly across the U.S. north to British Columbia, Great Lakes, and Pennsylvania.).
1964; Meanley and Bond, 1970), New York State (Allen, 1914), and the
mid-southern United States (Meanley, 1971: 14) also have indicated that
Red-wings normally remain close to their breeding areas until after the
fall molt is completed in early October. However, apparently not all
populations are sedentary at this time.
show that many Red-wings undertake rather extensive southerly migrations
during August and September before the fall molt is complete.
In (1936) it was also found that some Red-wings breeding
in the coastal areas of Massachusetts move as far south as southern New
Jersey during August and September.During the fall migrating.


For example, red-wings roosting in eastern Texas, Arkansas, and Oklahoma
apparently commonly shift their roosting sites between years
among the states.migrating from breeding areas to wintering areas to the
breeding sites and to winter-roost areas and back again.
Florida in the United States has a large winter-roosting populations.

Fall.--After the young of the second brood are strong on the wing, sometime in July, the females and young gather in flocks and feed on the uplands during the day, returning to the marshes to roost at night. The adult males form separate flocks and follow the same plan.
But early in August, all the redwings seem to disappear, during the molting period, and are not much in evidence until the middle of September or later, all in fresh plumage and ready to migrate. Allen (1914) explains this disappearance as follows:

The adult males, which begin molting about two weeks earlier than the females or young, are the first to go, and shortly they are followed by the females and young. To the ordinary observer they have completely disappeared.

Heres a map of the Atlantic flyway

Here is a map of the Pacific flyway

I think your right they migrate but I do not think there are many current studies on this bird!!

@pyoung,here is a link on Red Winged blackbird migration. lots of info.
You can also add your data to this ongoing study about their migration. the red winged blackbirds often change their migration modes which makes it very complicated. males and females are known to return at different times after a migration.
http://www.learner.org/jnorth/search/Rwb...

They also eat the seeds, according to a friend of mine. I think cattails are an important plant for wildlife.

I will do a little more reading on the Cornell web site and keep you updated. i think that the Cat tails would make excellent nest building material.I found that fact very intriguing

It is interesting because all I see is females, I think its possible they nest here and the males come down later?

It is very funny, I find lots and lots of these males on playgrounds! Will look out for females next time! But the most obvious here are males!

Thanks Emma, They flew very fast together it looked like a cloud of birds swooping down from the sky and flew right past us, and flew around a roof top, they are good at navigation, in a zigzag motion to this pond, they were not in the area all summer. Im guessing they flew down from the north, it looks like all females and I wonder if the males come later?

Absolutely! I took some photos last year of a small flock of red-winged blackbirds that were hanging outside the cafeteria at the VA hospital at Ft. Miley in San Fran. I'd never noticed before how fluffy that patch of yellow and red is!