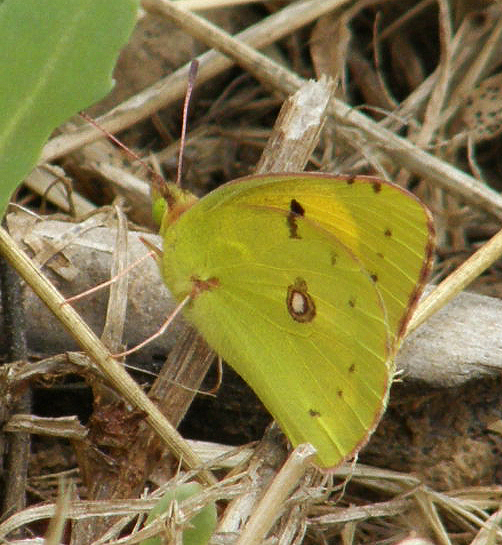 Colias croceus is a small butterfly of the Pieridae family, that is, the Yellows and Whites.The upperside is golden to orange yellow with a broad black margin on all four wings and a black spot near the center forewing. The underside lacks the black borders and is lighter, with a more greenish tint, particularly on the forewings. In the forewing underside is the same dark spot as on the upperside, but often with a light center; the hindwing underside has a white center spot, often with a smaller white or dark dot immediately above it. Sometimes, a row of black dots occurs on the underwings' outer margins, corresponding to where the black border ends on the upperside, Females differ from the males in having yellow spots along the black borders on the upperside. In a small proportion of females the golden upperside colouration is replaced by a pale cream colour. These have been distinguished as form helice, but do not seem to be that distinct as intermediates exist and the variation is to some extent related to humidity during development, with dryer conditions producing paler coloration. In flight, it is easily identifiable by the intense yellow colouring, much brighter than that of the lemon-yellow male Common Brimstone which also lacks black color. Like all Colias species they never open their wings at rest. Pale females can be confused with the rarer Pale Clouded Yellow. Even the palest C. croceus tends to have more black on the upperside however, in particular on the hindwings.

Breeding range is North Africa and southern Europe and eastwards through Turkey into the Middle East but it occurs throughout much of Europe as a summer migrant, in good years individuals reaching Scandinavia. In Asia, its range extends into central Siberia in the north and barely into India in the south; it is not found in Central Asia. In the UK they can be seen on the south coast almost every year in varying numbers, and regularly breed there.

Nice spotting! Thanks for adding in the new mission.