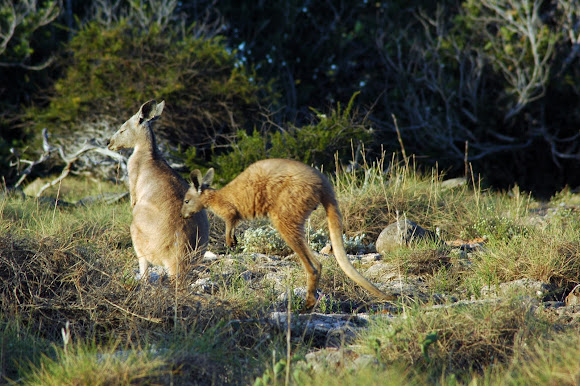 Female common wallaroo, with her nearly fully grown joey, sunning themselves at dusk. The Euro is the arid-zone sub-species of the most widespread kangaroo, the Common Wallaroo (or Hill Kangaroo). Euros have a large naked rhinarium giving them a dark shiny ‘button nose’ like koalas and wombats. They have no facial stripe but they do have large rounded ears. Their coat is coarser and shaggier than the fine down of Red Kangaroos. Females are relatively short and small and rarely exceed 25 kg. Their coat colour varies from light grey through light tan to dark grey. Males are short but very stocky with pronounced forearm musculature when mature. They reach around 50 kg and show a similar variation in coat colour to females but are distinguished by a rufous-brown nape and may often be darker coloured than females. The underparts are lighter and the tail tip is not black.