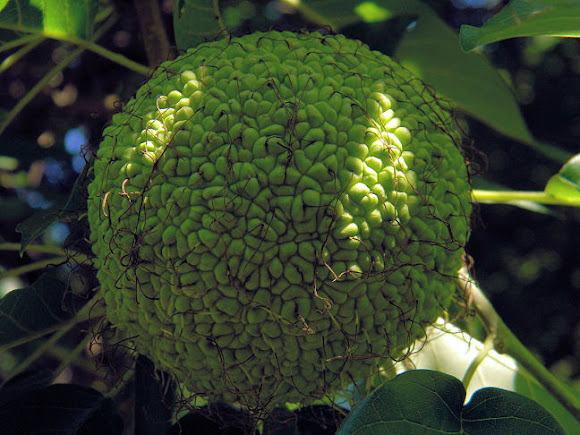 "Osage orange trees are a common sight on the Great Plains today although they were not a widespread member of the prairie community originally. Found primarily in a limited area centered on the Red River valley in southern Oklahoma and northern Texas (-- it is native to portions of Missouri as well), they were planted as living fences - or hedges - along the boundaries of farms, and have spread widely from these restricted, linear beginnings. The trees are easily recognized by their glossy, lance-shaped leaves, and their short, stout thorns. The name of the tree comes from the Native American Osage tribe, which lived near the home range of the tree, and the aroma of the fruit after it is ripe. Not all of the trees will have fruit because Osage Orange are either male or female, and only the females will bear fruit." http://www.gpnc.org/osage.htm