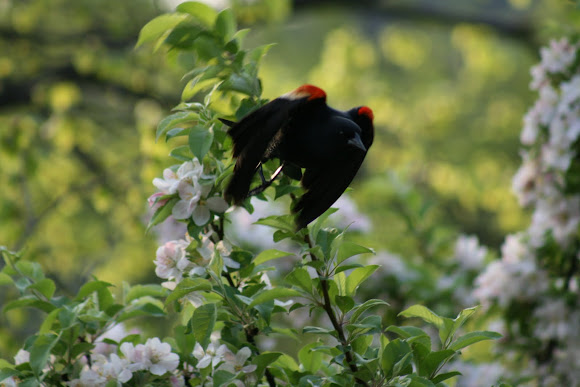 The common name for the Red-winged Blackbird is taken from the mainly black adult male's distinctive red shoulder patches, or "epaulets", which are visible when the bird is flying or displaying. At rest, the male also shows a pale yellow wingbar. The female is blackish-brown and paler below. The female is smaller than the male, at 17–18 cm (7 in) length and 36 g (1.2 oz) weight, against his 22–24 cm (9.5 in) and 64 g (2.2 oz). Young birds resemble the female, but are paler below and have buff feather fringes. Both sexes have a sharply pointed bill. The tail is of medium length and is rounded. The eyes, bill, and feet are all black. The male is unmistakable except in the far west of the US, where the Tricolored Blackbird occurs. Males of that species have a darker red epaulet edged with white, not yellow. Females of Tricolored, Bicolored, Red-shouldered and Red-winged Blackbirds can be difficult to identify in areas where more than one form occurs. In flight, when the field marks are not easily seen, Red-winged can be distinguished from less closely related icterids such as Common Grackle and Brown-headed Cowbird by its different silhouette and undulating flight.

The Red-winged Blackbird inhabits open grassy areas. It generally prefers wetlands, and inhabits both freshwater and saltwater marshes, particularly if Typha (cattail) is present. It is also found in dry upland areas, where it inhabits meadows, prairies, and old fields.