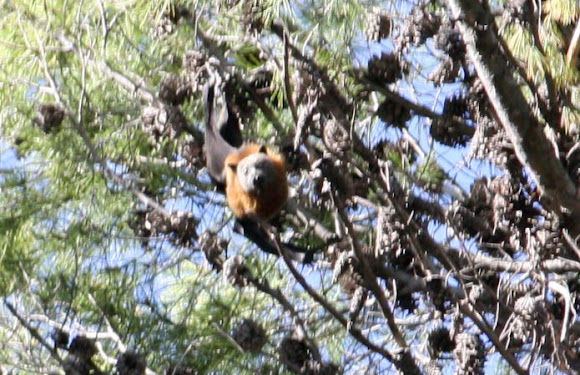 megabat native to Australia, A small number of Grey-headed Flying-foxes, sometimes known as fruit bats, have once again been seen at various locations across Adelaide.

From Wikipedia: The Grey-Headed Flying-Fox is the largest bat in Australia. It is tailless with claws on its first and second digits. Since it does not echolocate, it lacks tragus or leaf-ornamentation found in most species of Microchiroptera. It relies on sight to locate its food (nectar, pollen and native fruits) and thus has large eyes. The flying-fox has a dark grey body with a light grey head and a reddish-brown neck collar of fur. It is unique among bats of the genus Pteropus in that fur on the legs extends all the way to the ankle. Adult grey-headed flying-foxes have an average wingspan of over 1m and can weigh up to 1 kg. The head and body length is between 230 and 289 mm, with an average of 253 mm. The forearm length is between 138 and 180 mm, with an average of 161 mm. Weight generally varies between 600 and 1000 g, with an average of 677 g.