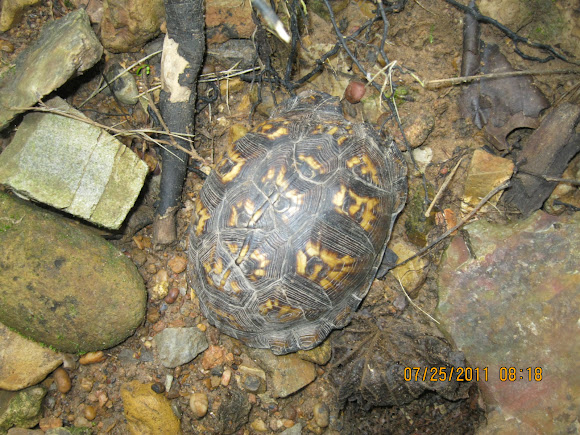 The Eastern Box Turtle (Terrapene carolina) was designated as the official Tennessee State reptile in 1995. This reptile has a lifespan between 30 to 60 years and grow to be about 6 inches in length. The box turtle will never venture far from its birth home so if you find one on the road just move it out of harms way don't take it home or anywhere else and release it as it can be very harmful and even deadly to the reptile not to mention that in Tennessee it is illegal to keep any animal taken from the wild as a pet. Box Turtle Taxonomy - Order: Chelonia  Family: Emydidae  Genus/species: Terrapene carolina  Subspecies: Terrapene carolina bauri (Florida box turtle)  Terrapene carolina major (Gulf Coast box turtle)  Terrapene carolina triunguis (three-toed box turtle)  Terrapene carolina carolina (eastern box turtle) There are six subspecies of box turtles. The four listed above are found in the United States; two subspecies are found in Mexico.   (This fact sheet describes a general box turtle, unless otherwise mentioned). Description  All T. carolina have a bilobed, hinged plastron that allows the box turtle to close its shell almost completely. They have a steep-margined, keeled, high-domed, rounded carapace with variable markings. Concentric growth furrows can be seen on the carapace, although in some older individuals they become very difficult to see. The upper jaw is slightly hooked. The toes are only slightly webbed. Males are slightly larger on average than females, the posterior lobe of their plastron is concave, and the claws on their hind legs are short, thick, and curved. Males also have thicker and longer tails. Females' rear claws are longer, straighter, and more slender, and the posterior lobe of their plastron is flat or slightly convex. Males have red irises and females have yellowish-brown irises.

Distribution and Habitat  Exclusively North American, box turtles occupy the eastern United States ranging from southern Maine to Florida along the East Coast, and west to Michigan, Illinois, eastern Kansas, Oklahoma, and Texas. Due to their popularity as household pets, box turtles are sometimes found far outside their normal geographic range. There are four subspecies of T. carolina in the U.S. Terrapene carolina bauri (Florida box turtle) lives in the peninsula of Florida. Terrapene carolina major (Gulf Coast box turtle) ranges from the panhandle of Florida westward along the gulf coast to eastern Texas. Terrapene carolina triunguis (three-toed box turtle) lives in the Mississippi River Valley from northern Missouri southward across southeastern Kansas and eastern Oklahoma into south-central Texas, and southeastward across western Tennessee and Georgia to the coastal lowlands. Terrapene carolina carolina (common box turtle), covering the largest area, lives from Michigan and Maine in the north, and ranges south to the boundaries of the other subspecies. Very little overlap occurs between the ranges of the subspecies of T. carolina, except for a region in Mississippi and Alabama where T. carolina triunguis and T. carolina carolina overlap. Box turtles live in open woodlands, pastures, and marshy meadows. They are often found near streams and ponds. Environmental temperature determines activity rate. Preferred body temperature is between 84 and 100° F (37.8° C). In the heat of the summer, box turtles largely restrict their activity to mornings and after rain. When it gets too hot, they hide under decaying logs and leaves, crawl into mammal burrows, or into mud. When it is really hot, they go into shady pools and puddles to cool off. In the spring and fall, they may be out foraging during all daylight hours, and they sometimes bask in the sun to get warm. Box turtles are diurnal and scoop out a shallow indentation in which to spend the night. In the northern regions, box turtles go into hibernation in October or November, but farther south they remain active later in the year. To hibernate, they burrow as far as two-feet deep into loose earth, mud, stream bottoms, old stump holes, or mammal burrows. They may return to the same place to hibernate in successive years and sometimes more than one turtle hibernates in the same hibernacula. They usually emerge from hibernation in April. They sometimes wake up and find a new hibernacula on warm days in the winter. These turtles usually have a home range with a diameter of 750 feet (230 m) or less in which they normally stay. Occasionally, for unknown reasons, they journey out from their home range. Home ranges of different individuals overlap frequently, regardless of age or sex. The turtles are often found together and show no antagonism towards each other.

Diet in the Wild  Omnivorous, these turtles eat snails, insects, berries, fungi, slugs, worms, roots, flowers, fish, frogs, salamanders, snakes, birds, and eggs indiscriminately. They have been observed eating carrion, feeding on dead ducks, amphibians, assorted small mammals, and even a dead cow. Their preference varies greatly by season but there is one definite trend. Young are primarily carnivorous while they grow during their first five to six years. Adults tend to be mostly herbivorous, but they eat no green leaves. Young often hunt in ponds and streams because the type of food they prefer is easier to catch there, but adults usually feed on land. Zoo Diet  At the Zoo, they are fed salad, earthworms, and crickets; rarely mealworms. Reproduction  There is some variation between the courtship rituals of the subspecies. The courtship of both T.c.carolina and T.c.major is divided into three phases: a circling, biting, shoving phase; a preliminary mounting phase; and a copulatory phase. T.c.triunguis and T.c. bauri both have somewhat different rituals, which may represent the ancestral method. Both triunguis and bauri males have added the behavior of pulsating their throats. T.c.triunguis does this in front of the female, and bauri males climb up on the females' carapace with all four feet and then pulsate. The actual copulation is the same in all subspecies, with the male standing somewhat upright, leaning the concave part of his plastron against the back of the female's carapace. It is in this balanced position that the male fertilizes the female with his penis. Males sometimes fall backwards after copulation, and if they can't right themselves they die of starvation. The mating season begins in the spring and continues throughout summer to October. Males may mate with more than one female or the same female several times over a period of several years. A female may lay fertile eggs for up to four years after one successful mating. Nesting occurs from May through July. Nests are usually dug in sandy or loamy soil, using the hind legs. Then eggs are laid in this cavity and the nest is carefully covered up again. Females lay three to eight eggs, usually four or five, and they are elliptical with thin, white, flexible shells. The female lays several clutches each year. Incubation normally lasts three months, but this varies according to soil temperature and moisture. Life Span Box turtles may live more than 100 years. Status  Box turtles are listed on CITES Appendix II. Collection for the pet trade and habitat destruction and fragmentation threaten the box turtle population. Fun Facts  When frightened, box turtles retract their head, tail, and limbs into their shell and clamp it shut. They wait in this position until the perceived threat is gone. While juveniles have several predators, very few species can prey effectively on adults due to this defense technique. Box turtles can be dangerous to eat. At times they consume poisonous mushrooms and the toxins may linger in their flesh. Box turtles are most famous for their hinged shell, which allows them to retract almost completely into their bony armor to hide from danger. This shell has great regenerative powers. A case was reported in which the carapace of a badly burned box turtle underwent complete regeneration. ***The last photo in the frames above is of the creek that runs along-side my property, and where I do all my geology and conservation studies. It's beautiful, and I love to spend hours in the mud, (depending on the season) or in the dry creek bed, hunting for fossils of the Carboniferous Era.