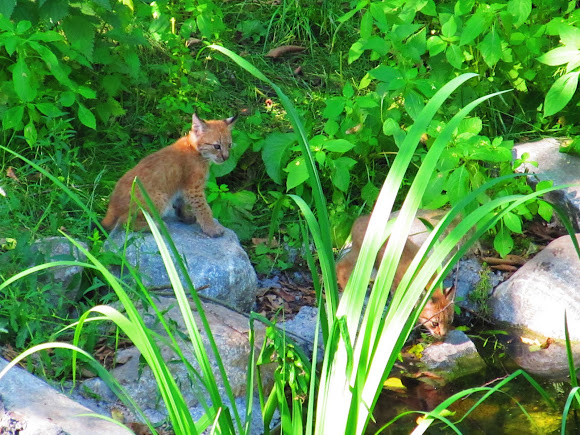 Lynx have short tails and characteristic tufts of black hair on the tip of their ears.They have a ruff under the neck, which has black bars (not very visible), resembling a bow tie. They have large padded paws for walking on snow, and long whiskers on the face. The large body colour varies from medium brown to gold-ish to beige-white; and occasionally, is marked with dark brown spots, especially on the limbs. All species of lynx also have white fur on their chests, bellies and on the insides of their legs, which are extensions of the chest and belly fur. Also, the lynx's colouring, fur height and paw size varies by its climate range—in the Southwestern United States, the fur and colour are short-haired, dark and the paws are smaller and less padded; as the lynx ranges to its colder northern climates, the fur gets progressively thicker (for warmth), the colour gets lighter (for camouflage) and its paws enlarge and become more padded (for snowy environments). Their paws may become larger than a human hand or foot.

The Eurasian lynx (Lynx lynx) is the biggest of the lynxes. It is native to European and Siberian forests. While its conservation status has been classified as "Least Concern", populations of Eurasian lynx have been reduced or extirpated from western Europe, where it is now being reintroduced.

Lynx are usually solitary, although small groups of lynx may travel and hunt together occasionally. Mating takes place in the late winter and they give birth from two to four kittens once a year. The gestation time of lynx is about 70 days. The young stay with the mother for one more winter, a total of around nine months, before they move out to live on their own as young adults. Lynx will create their dens in crevices or under ledges. They feed on a wide range of animals from white-tailed deer, reindeer, roe deer, small red deer, and chamois, to smaller, more usual prey: snowshoe hares, fish, fox, sheep, squirrels, mice, turkeys and other birds, and goats. They also eat ptarmigan, voles and grouse.

Every cat is so beautiful..!!

No, unfortunately they were not taken in the wild. They were taken in Skansen zoo in Stockholm.

Thanks for the comments :)

Adorable babies. Yes, were they taken in the wild? Not that it matters

Were these photos taken in the wild?
Great pics any way....