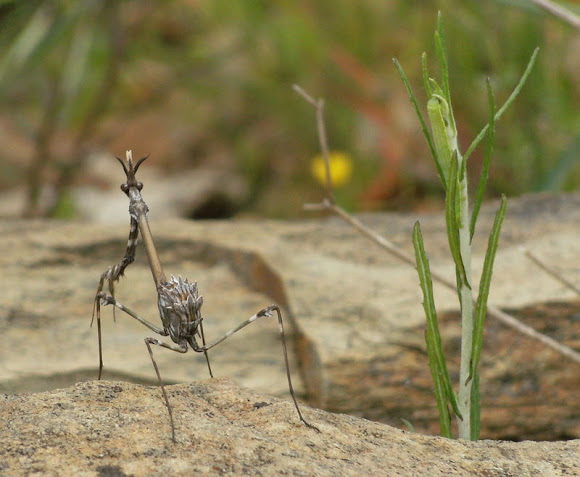 This species of mantis, although similar in size to the common Praying mantid (Mantis religiosa), is easily distinguished by the protrusion from its crown. Both male and females, even from first hatching carry this tall extension giving them a very alien appearance. They live in areas that are warm and dry and use their cryptic colouring of either greens and pinks or various shades of brown to keep them hidden from predators. The female may grow to a length of 10cm while the male is shorter and slimmer. The adult male has distinctive 'feather' type antennae. As with other forms of mantis most food is gathered in a very patient manner (they have been observed in the same place stalking prey on consecutive days). Poised by a flower, using their colours for camouflage, they use four legs to hold the position whilst the front legs are held up and folded. They swivel their heads and use binocular vision to locate small flying insects and then grab it from the air impaling it onto the serrations of the forelimbs so that it cannot escape. Eating the head and neck first is a way to ensure that the prey does not struggle. They will often rest upside down.

They live and hide within rough grass and annual flowering plants from which they hunt small insects.

This is an immature empusa pennata, as can be seen by the curled abdomen.

Thanks. :) It's definitely not a mantis I see regularly, and trying to ID it is what brought me to PN in the first place. :)

well, that was a great first spot...how interesting!

Obrigado, António! I have only ever seen this mantis once or twice, they are fascinating creatures! Thank you for your support as well - it is good to share Portuguese biodiversity! :)

great first spotting dangermouse,beautiful mantis you cache,great spotting page,thanks for sharing and for the support you gave me allways my friend:)

I have only seen this type of mantis occasionally and only this once well enough to photograph it, but according to my wildlife book, it's widespread in the Mediterranean. I spotted this in rocky, sparse terrain - maybe that's where it likes to live. Thanks for commenting. :)

This insect is so strange and beautiful...
Are they common there? I've never seen nothing like this before and we don't live so far from each other

Lol, someone else said it looks like it's come out of a Spielberg movie! Thanks. :)

Wow!.. cant stop thinking that it looks like the bugs from "Starship Troopers" movie a bit..
The second shot is exceptional..

And the gardens of my clients too. :) Although sometimes I get distracted by the fauna instead of actually doing my work...! But it is a great job. And thanks for commenting on the photo. :)

Amazing mantis! Nice that you can photograph the fauna around your garden while working. Is a beautiful job! :-)

I think I found something, have a look the rest of my research I did send you on email, from your web site: http://www.youtube.com/watch?v=gmtL_GshF...

Wow, great spotting. Looks like something out of a speilberg flick.

Thanks for the spot!

That would be great, thanks. :)

I´ll check on the internet and send you some pictures

It was a lucky shot, actually, as the mantis was running away from me!
Sounds like some fantastic colouring on those communicating mantids. I wonder if I could find a photo somewhere.

love the second one, great composition!
those communicating mantis, are some mm big, white with pink and violett patterns on their "hands"

As soon as I find them, I will put them up. :) I just found another of this mantis, taken at the same time. I'll add that to this spotting. Mantids are fascinating, and ones that communicate with each other? Now that would be interesting to see!

please post them. :)
I really like all kinds of mantis, once I heard of a species in thailand, which communicates with their "hands" weaving to each other.

I'm a gardener so I get to see a few of them around and have set myself the task of trying to photograph them all - it keeps me busy, though technically I should be working! I bet it was fascinating to watch, in a gruesome sort of way. I did see a mantis eating a large cricket/grasshopper once, and I may have photos around somewhere....

that´s quite a job!
sadly I haven´t seen them lately in my garden... I even saw a female eating her mate. no picture of that though :(

:) I'm lucky enough to have seen quite a few different types, even the tiny ones that are only a few mm long. Still working on getting photos of them all!

you are a mantis expert! wow!