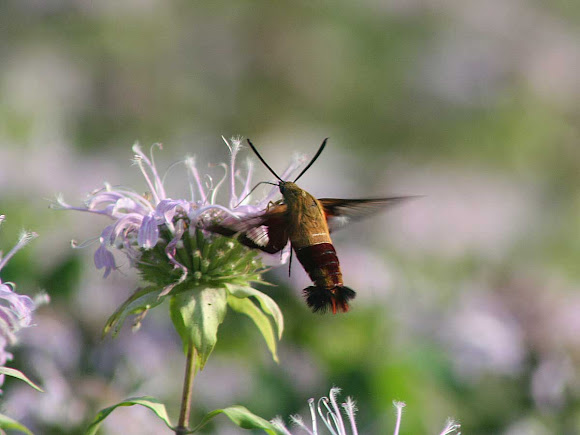 It is about 2” in length. The moth's abdomen has yellow and black segments much like those of the bumblebee, whom it might be mistaken for due to its color and flight pattern similarities. The moth's wings lack the large amount of scales found in most other lepidopterans, particularly in the centralized regions, making them appear clear. It loses the scales on its wings early after the pupa stage by its highly active flight tendencies. It flies during the daylight much like the other hummingbird moths, but it may also continue flight into the evening, particularly if it has found a good source of nectar.

I made the same mistake as the description suggest, that I mistook it for a hummingbird or a type of bee. I think my exact thought was "Oh, that's one of those big bee-looking things--no, wait, I think it's a hummingbird." I was resigned to thinking it was a hummingbird until I got home to take a closer look at the pictures and noticed the spiral proboscis. This is the first time I have ever seen, let alone, photographed this species. It's great learning new things!

Alice, they're very interesting creatures! The state park where I photographed it has a meadow thick with Bee Balm so I'm sure it attracts quite a few of them there.

I learned to call them Hawksmoth and I am having trouble remembering the new name. It is feeding from Bee Balm.