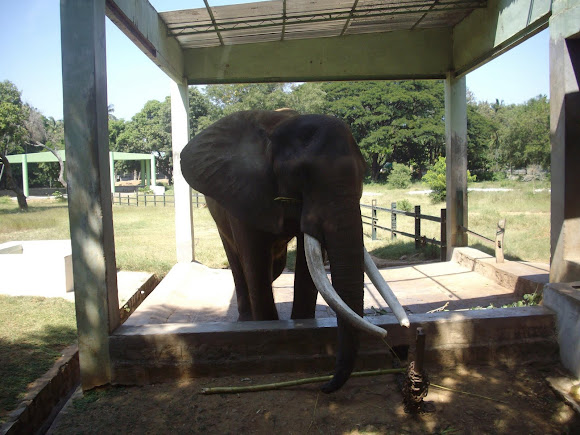 "Timbu", the only African Elephant to have been sucessfully bred in a zoo in India."Timboo" is one of the best zoo specimens in the " Sri Chamarajendra Zoological Gardens( Mysore Zoo)" in India.His large majestic tusks are an indication of his size and power, a beautiful specimen of his species.View the video.This is the best or one of the best zoo's in India.Seeing him , the meaning of the word "JUMBO" is understood.

Timbu was sucessfully mated and his offspring "Richi" is at present a magnificient 15 year old male tusker..Sadly, "Timboo" accidentally killed his mate by pushing her into the zoo moat.Recently, in January 2010 "Timbu" got violent and broke down this enclosure in which i photographed him in 2009.according to the zoo-keepers he misses his mate.

Rudy..I agree with the feeling of "overwhelming" and "Jumbo" like you say...when I saw a wild African Tusker @ Masai Mara in the middle of the night, his sheer size and magnificence was awesome!...asian elephants are relatively puny by comparison....thnx for sharing

Emma, thanks for the compliments, agreed, akin to "Timbu", Alexandrine parakeet "Mittoo" is a rare kind of his species.