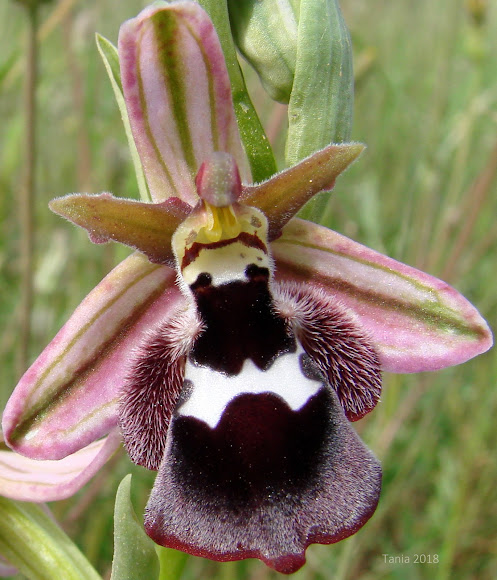 It looks like a wayward duck of Donald's family but in fact it is one of the most beautiful and impressive members of the genus Ophrys and, having such a distinctive flower, is hardly being mistaken for any other Ophrys. It is a species of great diversity as seen in the photos where, in a single group or even in the same plant, the flowers are different from each other, usually in the design of the main lip. See (pcs.3&4) the very interesting way the macula is formed: dark purple-brown patterns broadly bordered with white.

Found in uncultivated prairie with grasses and next to other species of the genus Ophrys (O. mammosa, ferrum-equinum)

O. reinholdii was first described by Fleischmann from Attica, Greece in 1907 and was named in honour of an eminent 19th century Athens doctor.

This record seems to be the first report of O. reinholdii in Mesogeia, Attica, Greece.

Thanks AshleyT for the nomination!