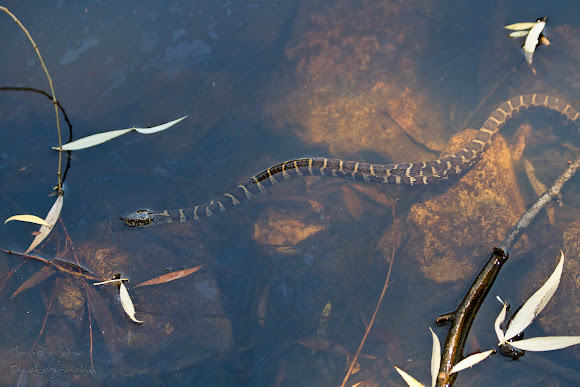 This snake was about 3 feet long and banded. Northern Water Snakes are found in much of the eastern half of the United States. Adults are typically 2 to 3 feet in length. There are two principal subspecies: Nerodia sipedon sipedon and Nerodia sipedon pleuralis. Nerodia sipedon sipedon is commonly called the Northern Water Snake and Nerodia sipedon pleuralis is called the Midland Water Snake. As their names imply the Northerns are found in the northern half of the eastern US and the Midlands are found in the lower half of the Mississippi River drainage. There is a large region of integration of the two supspecies strecthing from North Carolina to Oklahoma. It is probable that all specimens found in South Carolina are intergrades of the Northern/Midland subspecies. SC specimens from the same litter can look like typical Northerns and Midlands. Due to their band-like markings and frequent orange coloration, Northerns are often misidentified as venomous Copperhead Snakes. **Info taken from snakesandfrogs

This snake was swimming in a pond hunting frogs and fish. He was about 3 feet long.

We watched him catch a fish and eat it. You can see the buldge of the fish inside him.