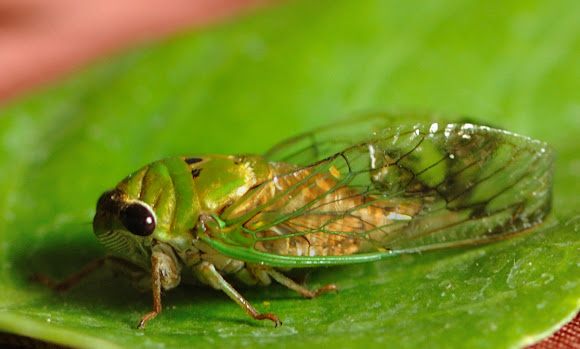 found this guy on the ground while on a morning walk. A cicada ( /sɪˈkeɪdə/ or /sɪˈkɑːdə/) is an insect of the order Hemiptera, suborder Auchenorrhyncha (which was formerly included in the now invalid order Homoptera), in the superfamily Cicadoidea, with large eyes wide apart on the head and usually transparent, well-veined wings. There are about 2,500 species of cicada around the world, and many of them remain unclassified. Cicadas live in temperate to tropical climates where they are among the most widely recognized of all insects, mainly due to their large size and unique sound. Cicadas are often colloquially called locusts,[1] although they are unrelated to true locusts, which are a kind of grasshopper. Cicadas are related to leafhoppers and spittlebugs. Cicadas are benign to humans in normal circumstances and do not bite or sting in a true sense, but may in fact bite after mistaking a person's arm or other part of their body as a tree or plant limb and attempt to feed. Cicadas have a long proboscis under their head that they use for feeding on tree sap, and if they attempt to inject it into a person's body it can be painful, but is in no other way harmful. This sting is not a defensive reaction and should not be mistaken for aggression; it is extremely uncommon, and usually only happens when they are allowed to rest on a person's body for an extended amount of time. Cicadas can cause damage to several cultivated crops, shrubs, and trees, mainly in the form of scarring left on tree branches while the females lay their eggs deep in branches. Many people around the world regularly eat cicadas though the female is prized for being meatier. Cicadas have also been known to be eaten in Ancient Greece, China, Malaysia, Burma, Latin America, and the Congo. Shells of cicadas are employed in the traditional medicines of China. Cicada nymphs suck xylem from the roots of various species of tree, including oak, cypress, ash, and maple. While it is common folklore that adults do not eat, in reality they do have their own sucking mouthparts, and also drink plant sap.

Cicadas live underground as nymphs for most of their lives, at depths ranging from about 30 cm (1 ft) down to 2.5 m (about 8.5 ft). The nymphs feed on root juice and have strong front legs for digging. In the final nymphal instar, they construct an exit tunnel to the surface and emerge. They then molt (shed their skins) on a nearby plant for the last time and emerge as adults. The abandoned skins remain, still clinging to the bark of trees.

The name is a direct derivation of the Latin cicada, meaning "tree cricket". There is no word of proper English, or indeed Germanic, etymology for the insect. In classical Greek, it was called a tettix, and in modern Greek tzitzikas—both names being onomatopoeic. Desert cicadas are also among the few insects known to cool themselves by sweating, while many other cicadas can voluntarily raise their body temperatures as much as 22 °C (40 °F) above ambient temperature

Nice to see yours is alive Susan : )

thanks for the compliments all!

Outstnding information and I love your picture!