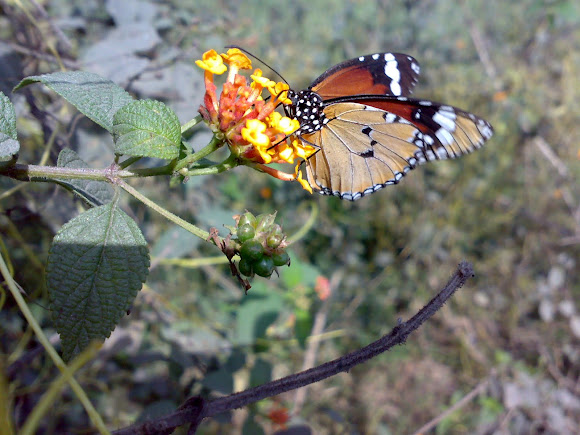 The Plain Tiger is a medium-sized butterfly with a wingspan of about 7–8 cm. The body is black with many white spots. The wings are tawny the upper side being brighter and richer than the underside. The apical half of the fore wing is black with a white band. The hind wing has 3 black spots around the center. The hind wing has a thin border of black enclosing a series of semicircular white spots.

The range of the Plain Tiger extends from Africa and southern Europe, eastwards via Sri Lanka, India, and Myanmar to China and Sulawesi. This butterfly was hovering over the flowers of the bush near Railway Station, Khatima, Uttarakhand, India.

Danaus chrysippus, known as the Plain Tiger or African Monarch, is a common butterfly which is widespread in Asia and Africa. The Plain Tiger can be considered the archetypical danaine of India. -- Editing info: According to the suggestions of AshishNimkar & auntnance123.

Very common here too in Portugal, and very popular with the butterflies!

Yes Lantana camara plant it is... Its a very common scene here in India..!!

A beautiful photo, very clear. Butterflies certainly like lantana plants, I have noticed!

"Very special thanks to Auntnance123."

Yes Nance you are perfect...we call it Plain tiger butterfly in India.

I think what you have here is the African monarch (http://en.wikipedia.org/wiki/Danaus_chry...) as opposed to the North American monarch referenced.