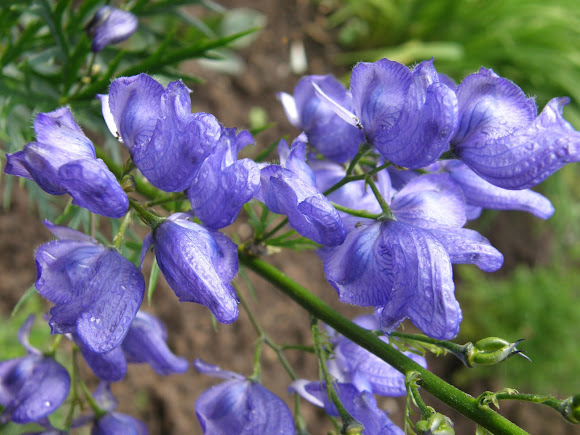 These herbaceous perennial plants are chiefly natives of the mountainous parts of the northern hemisphere, growing in moisture retentive but well draining soils on mountain meadows. Their dark green leaves lack stipules. They are palmate or deeply palmately lobed with 5–7 segments. Each segment again is 3-lobed with coarse sharp teeth. The leaves have a spiral or alternate arrangement. The lower leaves have long petioles. The tall, erect stem is crowned by racemes of large blue, purple, white, yellow or pink zygomorphic flowers with numerous stamens. They are distinguishable by having one of the five petaloid sepals (the posterior one), called the galea, in the form of a cylindrical helmet; hence the English name monkshood. There are 2–10 petals, in the form of nectaries. The two upper petals are large. They are placed under the hood of the calyx and are supported on long stalks. They have a hollow spur at their apex, containing the nectar. The other petals are small and scale like or non forming. The 3–5 carpels are partially fused at the base. The fruit is a follicle, a follicle being a dry, unilocular, many-seeded fruit formed from one carpel, and dehiscing by the ventral suture in order to release seeds.

Gardens & woodland near water in the case of this spotting.

Unfortunately not. I don´t have more pics and I also don´t remember well how the inside of the flowers look like.
The web site is very interesting! i actually work in KU Leuven but did not know about this web until very recently..Thanks!

Marta, do you have any more detail? From what I see it could be lot's of thing from Polemonium caeruleum to some kind of campanule. An image of a leaf of the geometry of the flower would help.
A website that could be interesting to you: http://www.kuleuven-kortrijk.be/bioweb/i...