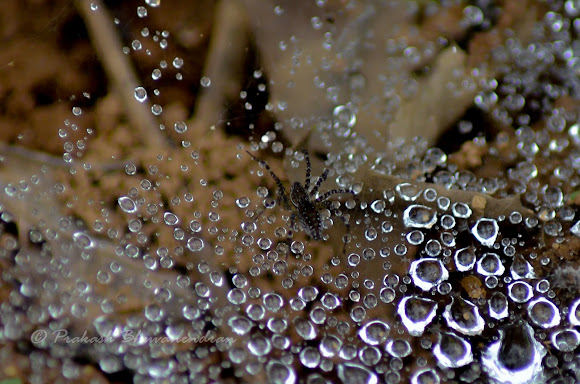 Nursery web spiders are spiders of the family Pisauridae. They resemble wolf spiders (family Lycosidae), but they carry their egg sacs by means of their jaws and pedipalps (instead of attaching them to their spinnerets). When the eggs are about to hatch, a mother spider will build a nursery "tent", put her egg sac inside, and mount guard outside. The name nursery web spider is especially given to the European species Pisaura mirabilis, but the family also includes fishing spiders and raft spiders.

Unlike the wolf spiders, which have two very prominent eyes in addition to the other six, the eyes of the nursery web spiders are more or less the same size.[1] Many species are able to walk on the surface of still bodies of water, and may even dive beneath the surface for a time to escape enemies. In escaping predators, they may very well jump a distance of five or six inches. However, they do not find it easy to make their way up extremely smooth surfaces such as glass. The female spider will sometimes attempt to eat the male after mating. The male, to reduce the risk of this, will often present the female with a gift such as a fly when approaching in the hope that this will satisfy her hunger, and sometimes this gift is a fake present intended to fool the female.[2]