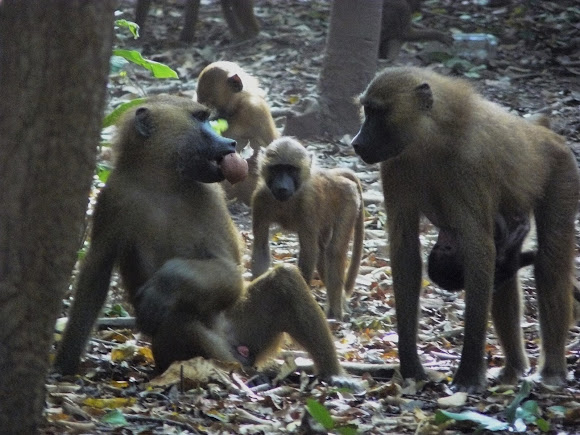 It has reddish-brown hair, a hairless, dark-violet or black face with the typical dog-like muzzle, which is surrounded by a small mane, and a tail carried in a round arc. It also has limb modifications that allow it to walk long distances on the ground. The Guinea baboon is one of the smallest baboon species. This troop had a broad range of ages, with some quite small ones. There were about 30 individuals, which isn't unusual as some troops can have nearing 200.

This baboon inhabits a small area of western Africa, and seen here just outside a camp where it seems to hang out a lot of the time. This is perhaps as they try and make frequent raids on the Mandina Lodge compound to see what they can grab.

Great series Mel, and good notes. Thanks for sharing. I'm getting jealous again 😊

Thanks AntonioGinjazGinja, they were a big, noisy family and great to watch.