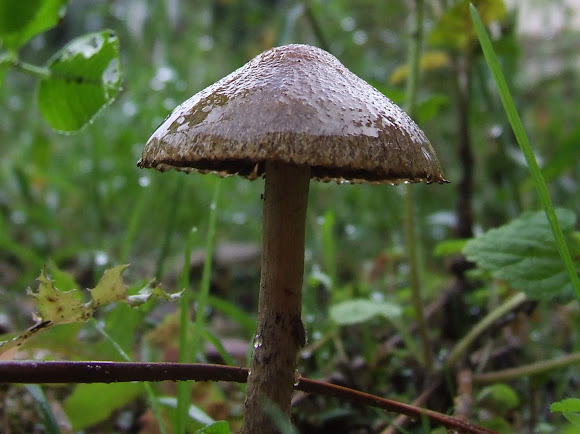 Typically small- to medium-sized, P. ammophila is found growing singly or in small clumps near marram grass. The cap is a light clay-brown or tan when younger and about 1 to 4 centimetres (0.4 to 1.6 in) in diameter. Although the cap is generally smooth, it possesses microscopically tiny hairs and is often coated with sand particles. The tissue is not hygrophanous and therefore does not change colour with moisture loss and absorption, but the mushrooms do darken to a dark brown as they age. Cap shape begins as campanulate or convex, gradually flattening and possibly becoming depressed in shape. The gills of P. ammophila are crowded and attached to the stem usually broadly (adnate) but occasionally narrowly (adnexed). At a very young age they may be a pallid brown, but for most of the lifespan are dark brown, sometimes turning black

Psathyrella ammophila has a wide but sparse distribution throughout the European continent and in limited coastal locations outside Europe, with records of collection in Algeria, New Zealand, and Canada. It can sometimes be found near the shoreline, inside the littoral zone, but is most often encountered in more stable and established sand dunes and dune slacks inland

Spotted in a mix forest near my house,in the base of a moved land ,mixed with sand,probably used in urban construction and dumped here a few months ago,so the spores most come here with the sand,taken from the near sea side.