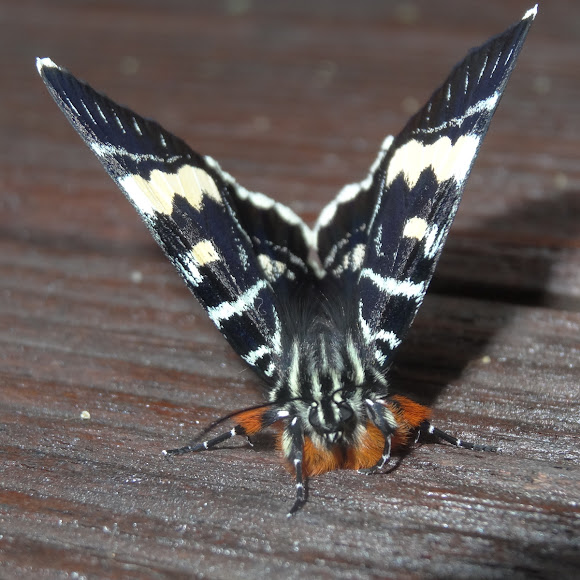 A daytime flying moth with a wingspan of about 50mm.

This one was on a suburban ornamental grape vine in suburbia.

A Noctuid moth endemic to the south-eastern part of Australia and is now an invasive species in many other parts of the world. In 1862 the Indian Myna (Acridotheres tristis) was introduced into Australia to control the Grapevine Moth. The bird is now considered a pest and Grapvine moths are common. I watched a female for ten minutes - first seeking the location of a vine - second happy she was near one she just started releasing eggs; one every 30 seconds while fluttering her wings - third the eggs just fell to the ground around the base of the vine. Over the next few days I noticed scores of tiny caterpillars climbing slowly up the supporting posts. Near enough was good enough I guess. Family: Noctuidae Genus: Phalaenoides

Gorgeous! I would have guessed an Arctiid with those colors. Love the undies.

Wow, and you got to see the whole thing. Nice moth!

Beauty! Love the small splash of color on the legs!