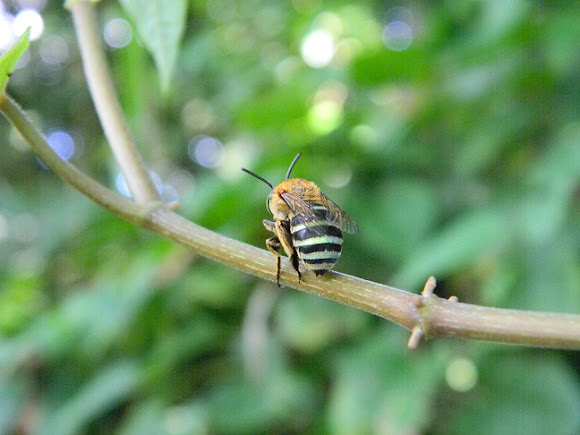 Amegilla cingulata, commonly known as the blue banded bee, is an Australian native bee. It is also found on New Guinea, and in Indonesia, East Timor and Malaysia. It appears to live in tropical and subtropical regions. The bees inhabit urban areas, woodlands, forests and heath areas. It belongs to the Anthophoridae family of insects. The thorax and head of Blue-banded Bees are covered with golden hairs and abdomen is banded with pale blue bands on black. This is a solitary bee but females may build nest together in same location with other Blue-banded Bees. Blue-banded Bees are known as buzz pollinators. They use special technique to get the pollen from flowers known as buzz pollination. They hold the flowers and vibrate with loud buzz sound. The vibration excited the flower which drop the pollen onto the bees body. Other insects do not know this technique cannot get the pollen. Every time the bees rest on a flower, we can hear a short loud buzz sound.

Observed momentarily on a vine in a large semi-urban yard & garden next to a disturbed patch of remnant lowland forest.

The female neon cuckoo bee, Thyreus nitidulus, ( http://www.projectnoah.org/spottings/113... ) seeks out the burrow nests of the blue-banded bee, and lays an egg into a partly completed brood cell while it is unguarded. The larval cuckoo bee then consumes the larder and later emerges from the cell. ( http://en.wikipedia.org/wiki/Thyreus_nit... )

Grateful for confirmation of genus to Anthidium.

Yes it hovered. It favored landing on open ends of leaves, vines, twigs...

Good question. Did you see him while he was flying. Did he hover!