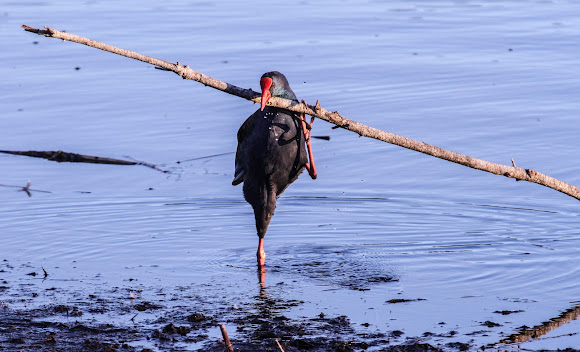 This chicken-sized bird, with its large feet, bright plumage and red bill and frontal shield is easily recognisable in its native range.

The Purple Swamphen prefers wet areas with high rainfall, swamps, lake edges and damp pastures. The birds often live in pairs and larger communities. It clambers through the reeds, eating the tender shoots and vegetable-like matter. They have been known to eat eggs, ducklings, small fish and invertebrates such as snails. They have even been known to attack large eels, however there is no consensus amongst ornithologists if they actually eat eel. They will often use one foot to bring food to their mouth rather than eat it on the ground. Where they are not persecuted they can become tame and be readily seen in towns and cities.

Thx Everyone for the words!