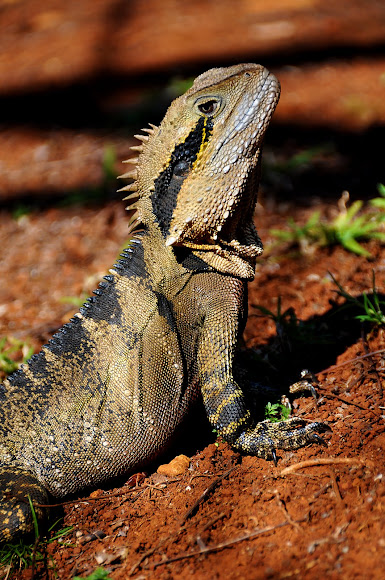 "Australian water dragons have long powerful limbs and claws for climbing, a long muscular laterally-compressed tail for swimming, and prominent nuchal and vertebral crests (A nuchal crest is a central row of spikes at the base of the head. These spikes continue down the spine, getting smaller as they reach the base of the tail). Including their tails, which comprise about two-thirds of their total length, adult females grow to about 60 cm (2 feet) long, and adult males can grow slightly longer than one metre (3 feet) and weigh about 1 kg. Males show bolder colouration and have larger heads than females. Colour is less distinct in juveniles." - Wikipedia

"As its name suggests, the Australian water dragon is associated with water and is semi-aquatic. It can be found near creeks, rivers, lakes and other water bodies that also have basking sites such as overhanging branches or rocks in open or filtered sun. The species is so common in the rainforest section of Brisbane Botanic Gardens, Mount Coot-tha in Queensland that a monument has been built to them there." - Wikipedia

what a beautiful reptile

what a fancy name. but it exudes a reptilian beauty as well.