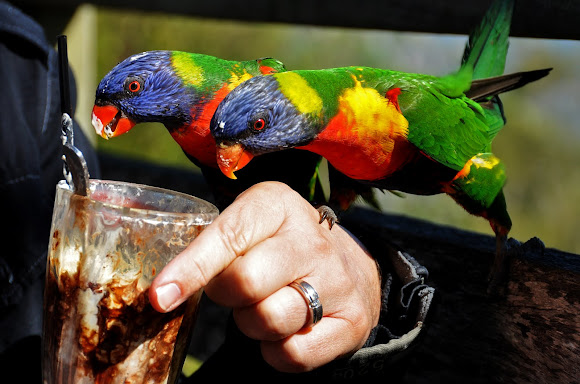 "The Rainbow Lorikeet (Trichoglossus haematodus) is a species of Australasian parrot found in Australia, eastern Indonesia (Maluku and Western New Guinea), Papua New Guinea, New Caledonia, Solomon Islands and Vanuatu. In Australia, it is common along the eastern seaboard, from Queensland to South Australia and northwest Tasmania." - Wikipedia

These rainbow lorikeets were very friendly and hang out at a cafe in the rainforest of Mount Tamborine, Gold Coast, Australia. The local lorikeets at this particular cafe have adopted the patrons as reliable suppliers of sugary snacks. There's nothing you can really do to stop them once they swarm from the surrounding rainforest. As you can see in the photos, they are more than willing to perch on your hand and indulge in your ice-chocolate, helping themselves. I'm not sure how healthy this kind of food is for them, but their numbers certainly aren't affected!