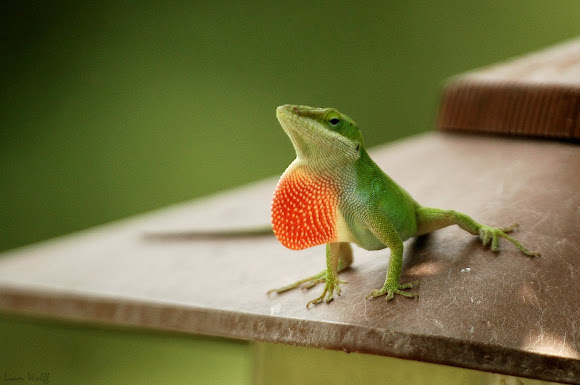 The Carolina anole (Anolis carolinensis) is an arboreal lizard found primarily in the southeastern United States and some Caribbean islands. Other common names include the green anole, American anole and red-throated anole. It is sometimes referred to as the American chameleon due to its color-changing abilities; however, many lizards are capable of this, and anoles are not true chameleons. The typical breeding season for green anoles starts from as early as April and ends to as late as August and lasts even occasionally into September. It is during this time that the most brilliant displays of these creatures can be seen, as the males must court the females with their elaborate displays of extending their brightly colored dewlaps while bobbing up and down, almost doing a dance for her while she runs in temptation from the male. The pursuit will continue until the two successfully mate.

Perfect in all senses,congratulations Liam

Beautiful pic!
These lizards change its color from green to brown because of the stress