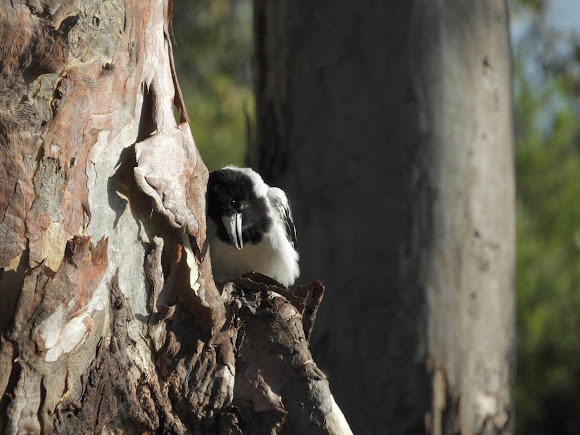 (Adults) Length 33-36cm. The sexes are alike. The head, neck, upper back, throat and breast, are black, while the collar, rump, lower breast and belly, are white. The wings are black, with a broad, white bar through the secondary coverts, to the secondaries, with the base primaries edged white. They have a black tail, tipped with white, on the outer feathers. The eye is dark brown. The bill is blue-grey, with a black-tipped hook. The feet are black

Bottlebrush, Eucalypt, Ti-tree and such Out at the Gordonbrook Dam Are where I took these photos Of the Pied Butcherbird. They come down to the picnic tables Or hang out near the 'hide' But there's plenty of open woodland For them, this Dam , to gird.

Also called:- Black-throated Butcherbird; Organbird; Black-throated Crow-shrike or Break-o'day-boy. John Gould first described this bird in 1837. Oh, yes, you do look innocent! With a 'helmet' and a 'bib' of black White apron rolled on down 'Tails' of black trimmed off with white Not a bad looking 'gown' Thick, hooked beak - just hear that CLACK Strong-clawed feet are found A terror to its victims But, oh, how I love their sound! The fluted piping that carry afar Are melodious to my ear And my day is brightened expressively When this bird-song, I hear. The antiphonal duets May be broken by A shriek, reek, in alarm But the morning air Filled with high/low, mellow tones Puts a body all a-calm. Perching on posts or open boughs Their prey they do seek for Nestlings, reptiles, insects or mice Shouldn't poke their nose out of doors For the Pied Butcherbird will spiral down on them One backing up the other Even small birds in flight aren't always safe Could become meal for one or the other. (Nesting time:- Then 'Mum' sits in a stick built cup-like nest For three weeks, 'til the young come forth Between August-December, in Southern parts May-November, in the North From oval, black/brown, spotted, dull-green eggs Hatch three to five new, little ones Then, as a family, they help each other out The breeding pair and their young. Reference:- Reader's Digest Complete Book of Australian Birds. Photos have been edited