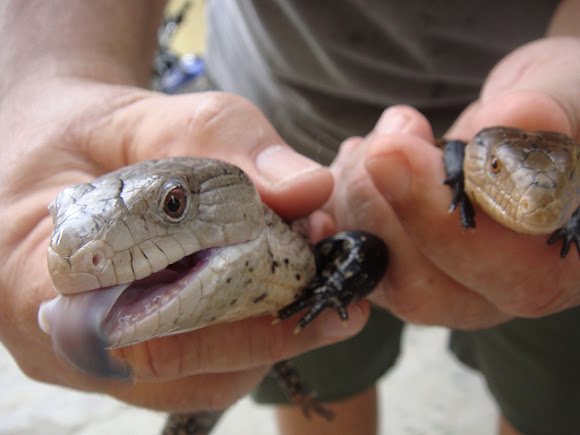 "Tiliqua gigas, commonly known as the [(giant)] blue-tongued skink, is best known for its bright blue tongue. It is a gray lizard about 30cm from the snout to the base of the tail and 55cm from the snout to the tip of the tail, with dark flanks and legs and lateral stripes. Its threat display, in which it opens its mouth wide to display its tongue and makes a loud hissing noise, is so striking that the [Indonesian]-speaking people of New Guinea call it “ular kaki [e]mpat” or “snake with four legs” and [to this day] fear that it [i]s extremely venomous. In actuality, however, the lizard is fairly harmless. Tiliqua gigas is an omnivore and is often associated with human agricultural settlements. A broad diet and distinctive appearance have recently made this species and its relatives popular as pets.

Found in our large semi-urban yard & garden adjacent to a disturbed patch of remnant lowland forest.

Where I live and work (and probably all over Papua) this lovely animal is ruthlessly persecuted (killed on sight) under the mistaken but steadfastly held belief that it is venomous (as stated in the EOL reference). I always take the opportunity to inform local people that they are harmless (or to demonstrate this, see 2nd photo) but they cannot not believe their ears or even their eyes, and I don't think I've had one convert! Originally I had saved the larger one from drowning in a rain gutter by our house when it was quite small. My wife caught the smaller one in our garden. They grew well in separate terraria. I've since released them to the adjacent patch of degraded forest.

The papayas faded them. It was also a grey day ;-)

They look like they need some blue berries. Fix those tongues.

Didn't realise they had blue tongues up there. I know there are a lot of similar species. Good to learn something new everyday

This is our local blue-tongue. We kept this one in the house for about a month so that she could heal from a bad injury. We called her "Betty": http://www.projectnoah.org/spottings/268...

Thanks. I have my own little campaign to show people that they are not dangerous (see second photo), but this mistaken belief is so indelibly etched in people's psyches that they literally don't believe their eyes. It's maddening...

That's sad that people kill them. The ones here are nearly tame. Good on you for taking care of them.