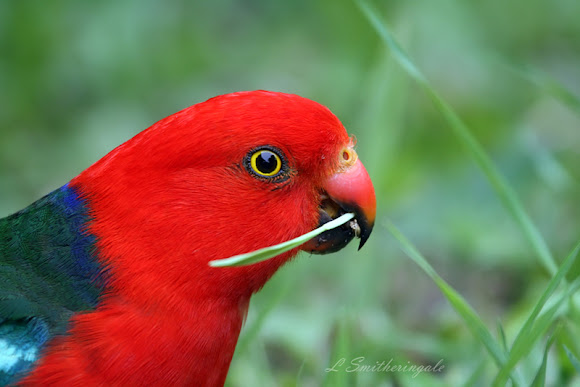 The Australian King Parrot has a large body - scarlet and green with a red beak, blue rump and long square-tipped tail. The male has a scarlet head and the female and immature birds have a green head.

We have a pair of King Parrots who come into our garden every year and they are spectacular. The scarlet colouring of the male is breathtaking and I think he is my favourite parrot. They are larger in size than the rainbow lorikeets.

All your photos are superb! What type of camera do you use?

Congrats Lesley, on a well deserved Spotting of the Day!

"Found in the temperate rainforest of eastern Australia, is the Australian King Parrot. The males are a brilliant scarlet color and never fail to impress."

I have just submitted it for the Colour Red Mission which I was unaware of - thank you so much for notifying me.

Definitely a candidate for the Color Red mission!

Thank you Elsa and lori.tas.

Feed them and they will come. Excellent shots of a beautiful birds.