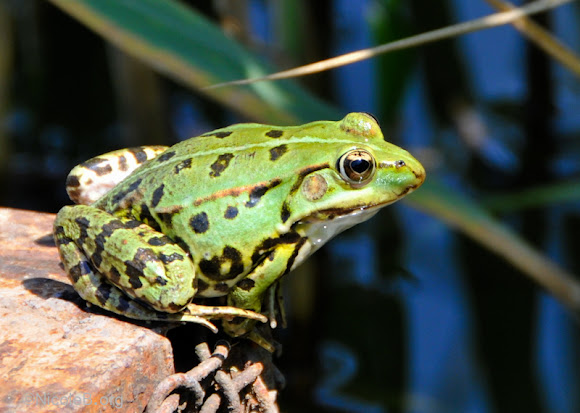 The Edible Frog (Pelophylax kl. esculentus) is a name for a common European frog, also known as the common water frog or green frog (however, this latter term is also used for the North American species Lithobates clamitans). It is used for food, particularly in France for the delicacy frog legs. Females are between 5 to 9 cm long, males between 6 to 11 cm. Pelophylax esculentus is the fertile hybrid of the Pool Frog (Pelophylax lessonae) and the Marsh Frog (Pelophylax ridibundus), hence the addition of the "kl." (for klepton or synklepton) in the species name. During the ice ages[clarification needed] the population of the common ancestor of both species was split into two. These populations diverged, but remained genetically close enough to be able to create fertile hybrids. However, when edible frogs mate with each other, their offspring are often misformed, so there are no pure populations of edible frogs. The hybrid populations are propagated by female edible frogs mating with males of one of the parental species.

Me neither. I did like frog legs, I admit. Not sure if I do any more :)

ur welcome.. although its call edible... i dont want to eat it.. =D

I think you got it right, zulkifly!
Thanks!

from the color and spot on his body and leg, i think this is Edible Frog.
http://true-wildlife.blogspot.com/2011/0...