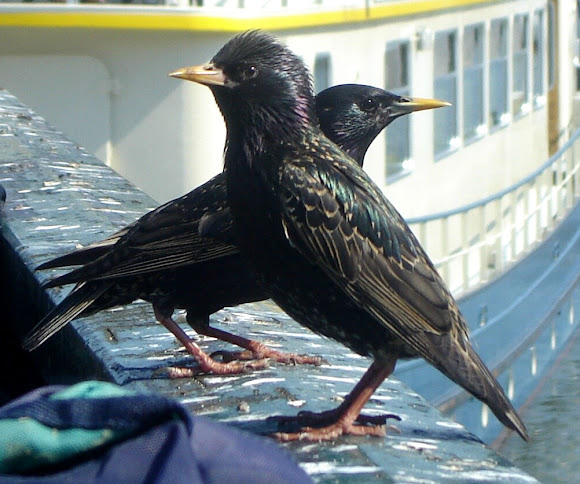 It is among the most familiar of birds in temperate regions. It is 19–22 cm long, with a wingspan of 37–42 cm and a weight of 60–90 g. The plumage is shiny black, glossed purple or green, and spangled with white, particularly strongly so in winter. Adult male European Starlings are less spotted below than adult females. The throat feathers are long and loose, and used as a signal in display. Juveniles are grey-brown, and by their first winter resemble adults though often retain some brown juvenile feathering especially on the head in the early part of the winter. The legs are stout, pinkish-red. The bill is narrow conical with a sharp tip; in summer, it is yellow in females, and yellow with a blue-grey base in males, while in winter, and in juveniles, it is black in both sexes. Moulting occurs once a year, in late summer after the breeding season is finished; the fresh feathers are prominently tipped white (breast feathers) or buff (wing and back feathers). The reduction in the spotting in the breeding season is achieved by the white feather tips largely wearing off. Starlings walk rather than hop. Their flight is quite strong and direct; they look triangular-winged and short-tailed in flight.[3][4] Confusion with other species is only likely in Iberia, the western Mediterranean and northwest Africa in winter, when it has to be distinguished from the closely related Spotless Starling, which, as its name implies, has less spotting on its plumage. The Spotless Starling can also be diagnostically distinguished at close range by its longer throat feathers.[4] At a more basic level, adult male European Blackbirds can easily be distinguished by more slender body shape, longer tail, and behaviour; they hop instead of walking and do not probe for food with open bills. In flight, only the much paler waxwings share a similar flight profile.

This species of starling is native to most of temperate Europe and western Asia. It is resident in southern and western Europe and southwestern Asia, while northeastern populations migrate south and west in winter to these regions, and also further south to areas where it does not breed in Iberia and north Africa. It has also been introduced to Australia, New Zealand, North America, and South Africa.