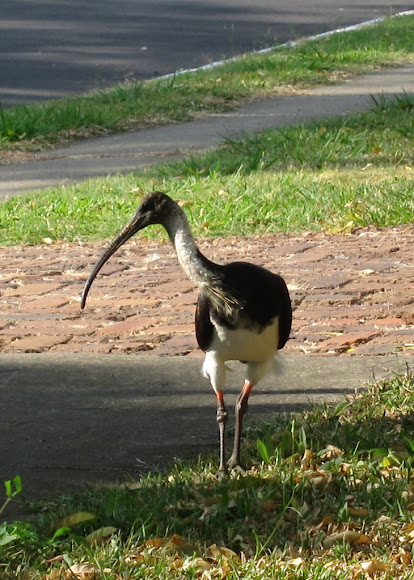 The Straw-necked Ibis (Threskiornis spinicollis) is a bird of the ibis and spoonbill family Threskiornithidae. It can be found throughout Australia, New Guinea, and parts of Indonesia. Adults have distinctive straw-like feathers on their neck.

They prefer freshwater wetlands, and swamp and lagoon margins, rather than coastal saltwater areas. They also gather in groups to scour grasslands and pastures for food.

I see this species of Ibis in our local parks. This fellow just strolled across the road onto my front lawn. Unlike its cousin, the Australian White Ibis (Threskiornis moluccus), I've never seen T. spinicollis raiding the rubbish bins, and have only ever seen them in grassy areas like parks. Perhaps I just haven't been looking hard enough.